The Golf Channel had to issue a correction about Patrick Reed during the third round of the Charles Schwab Challenge. 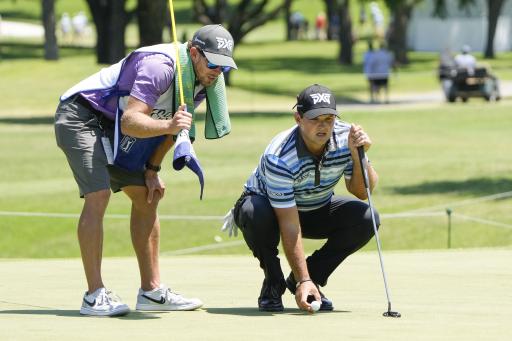 When it comes to Patrick Reed, one thing you can definitely bank on is that it will never not be interesting when he plays.

There's always...something. These days, it usually involves his wife's alleged burner account that gets into heated debates on Twitter.

The account @useGOLFFACTS has long been assumed to be controlled by Justine Reed or one of his team.

If you haven't checked it out, it's a pretty wild ride with some interesting accusations and conspiracy (?) theories levelled at the PGA Tour.

Most recently it has involved Tiger Woods being the beneficiary of special treatment before the US PGA Championship at Southern Hills.

Woods, 46, was allowed to have the course notes for his practice round whilst Reed (and the rest of the field?) presumably were not.

This week at the Charles Schwab Challenge on the PGA Tour it appears Reed is returning to the form we know he is capable of.

A pair of 66s followed by a 71 saw Reed in a tie for fifth after three rounds at Colonial Country Club after 54 holes.

Though it looked very much like Scottie Scheffler was going to win his fifth PGA Tour event of the season.

There was a bit of a hiccup for the Golf Channel team during Saturday's third round when they noted Reed was coming off a missed cut.

Reed wasn't, he made the cut comfortably at the US PGA Championship and finished T-34 in Oklahoma.

It forced the broadcast team to issue a correction live on air.