Callum Shinkwin: What's in the bag of the two-time DP World Tour winner? 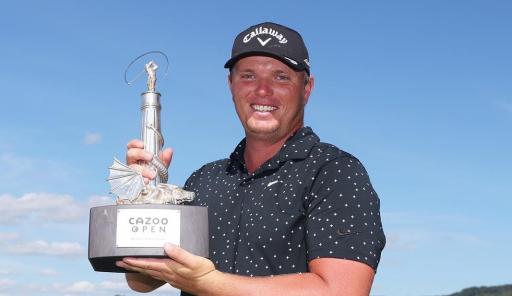 Callum Shinkwin was overcome with emotion after winning his second DP World Tour title at the Cazoo Open supported by Gareth Bale in Wales.

Shinkwin entered the final round one shot ahead of Julien Guerrier and despite an early bogey, he made four birdies on the front nine to lead by five at the turn.

The Englishman added birdies on the 11th and 15th holes on the Twenty Ten Course at Celtic Manor to card a 1-under-par 69 to win by four shots, while Guerrier struggled to a 5-over-par 76.

The 29-year-old has risen 65 places to 28th place in the DP World Tour rankings and he has doubled his win tally on the old European Tour, following up on his victory at the Aphrodite Hills Cyprus Open in 2020.

"I’m so over the moon. I played great today. My nan sadly passed away three weeks ago and to have my mum here to watch this is huge for me," said Shinkwin, the latest Callaway staff player to pick up a victory in the professional game.

Callum Shinkwin showing just how much his win at the Cazoo Open means to him pic.twitter.com/XowxqPOdQP

Shinkwin used a Callaway Rogue ST Triple Diamond LS, one of the best golf drivers in the game, as well as fairway woods in the same model on his way to victory.

Callum Shinkwin - What's in the bag?