Adrian Meronk wasn't happy with a duff shot he hit with a fairway wood during the ISPS Handa Australian Open, but most golfers would love to produce this ball flight. 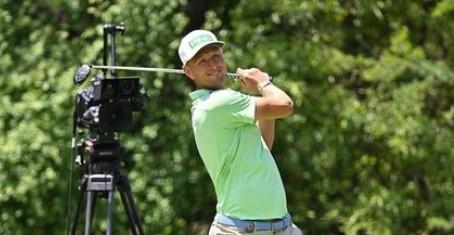 There are many shots that professional golfers despair at which mere mortals like us would be extremely content with, and this was evident on the DP World Tour this week.

Adrian Meronk has emerged as one of the most exciting talents on the Tour this year and he is backing this up by contending at the ISPS Handa Australian Open this weekend.

Meronk made his breakthrough on Tour by winning the Horizon Irish Open in July, becoming the first player from Poland to win a trophy on the circuit formerly known as the European Tour.

The 29-year-old has set high standards for himself in 2022 and there was evidence of this earlier in the week in Australia with one shot with a fairway wood in particular that he was annoyed with.

As you can see in the footage below, Meronk hit a shot he wasn't pleased with, but the ball flight was incredibly satisfying and one that golf fans will, no doubt, love to watch over and over again.

Every golfer wants to be able to hit a high-rising shot on repeat, but in this case, Meronk produced an aesthetically pleasing ball flight which isn't even the shot he wanted.

Meronk, who was confirmed as part of the Continental European team at the Hero Cup in January, could end his year in style as he trails Adam Scott by a single stroke heading into the final round in Melbourne.

After carding a disappointing score of 3-over in round one, Meronk has responded with scores of 6-under and 7-under to reach 10-under for the event. He will play with Scott and Min Woo Lee in the final round.

Meanwhile, at the bottom of the leaderboard, Cameron Smith missed the 54-hole cut after finishing on 1-over through three rounds. DP World Tour star Ryan Fox also missed the 1-over cut by a single shot.