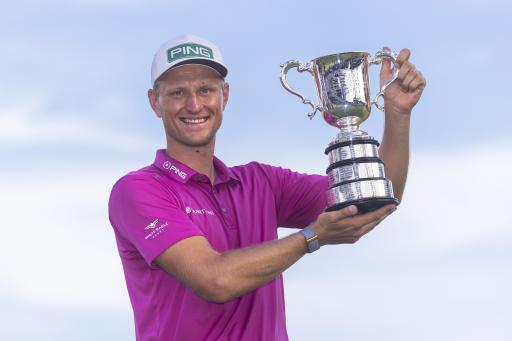 Adrian Meronk stormed to a second DP World Tour title as he eagled the last in a stunning five-shot victory at the ISPS HANDA Australian Open in Melbourne.

The Pole entered the day at Victoria Golf Club a shot behind former World No.1 Adam Scott but after a two-shot swing on the first he never looked back, signing for a 66 to finish at 14-under par.

NEW: Nobody can believe how many spots Meronk has moved in the OWGR after his latest win!

Meronk made the trip Down Under after a 2022 season that saw him become the first Polish player to win a DP World Tour event thanks to his triumph at the Horizon Irish Open and finish eighth in the Rankings.

The 29-year-old was 4-over after his first 16 holes in Melbourne and looked like he could be in a battle to make the cut after a 73 but followed that up with rounds of 66-63-66 to storm to the top of the leaderboard and take the trophy.

“I’m super excited and to finish like that on the 18th hole is just unreal. I’m so grateful, thank you for all the support and I enjoyed this week so much.

“I felt really good again today. I kept doing what I’ve done the last two days and it worked pretty well. I’m super proud of myself, proud of my team and super happy right now.

"I already did and I just looked how old this trophy is. It’s just incredible. I’m very proud and excited to be joining that company.

"I think I was leading almost the whole round but I think on the 13th I think I was just two ahead and then I think the 17th was a big hole for us, because I made a bogey, Adam made a double, so then I had three shots on the last hole and I knew if I hit it further, I had a good chance."

Home favourite Scott carded a 72 in front of adoring home crowds to finish a shot ahead of another Australian in Min Woo Lee, who recorded a closing 69.

Spaniard Alejandro Cañizares signed for a 64 to finish at seven under alongside Australia's Haydn Barron, one clear of Kiwi Josh Geary.

Lee, Barron and Canizares also secured a place in The 151st Open at Royal Liverpool through the ISPS Handa Australian Open as part of the second event in The Open Qualifying Series.

Australians Andrew Martin and Matthew Millar and Irishman Conor Purcell finished at five under, a shot clear of a group of seven players including Lucas Herbert, Nicolai Højgaard and Tom Lewis.

In the women's event, South Africa's Ashleigh Buhai finished a shot ahead of South Korean Jiyai Shin, while Kipp Popert cruised to victory in the G4D Tour season opener, winning the Australian All Abilities Championship @ the ISPS HANDA Australian Open by seven shots.

World Number One Popert carded a 69 to finish the week at two under and win a fifth G4D Tour trophy after four victories in the inaugural season.

Kurtis Barkley signed for a 79 to be the nearest challenger, with Spaniard Juan Postigo Arce then at six over, seven clear of England's Mike Browne and Irishman Brendan Lawlor.