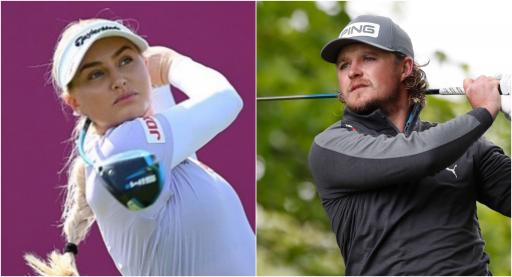 Eddie Pepperell and Charley Hull both made solid starts to the ISPS HANDA World Invitational in Northern Ireland on Thursday, carding respective scores of 66 and 68.

Fan favourite Pepperell only has two top-20 finishes on the European Tour in his last 11 appearances, but he is now only four shots behind the first-round leader Jordan Smith.

The 30-year-old will tee it up again with defending champion Jack Senior in round two on Friday at Galgorm Castle. Senior shot a 2-under-par 68 to sit six shots behind the leader.

Queen of the glove drill @HullCharley is underway at the #WorldInvitational

Pepperell and Senior trail Smith who shot a superb score of 8-under-par at Galgorm Castle. The 28-year-old was only 1-under-par through his first nine holes, but he then birdied seven holes on the back nine to finish with a scintillating 62.

Smith holds a two-shot lead after day one ahead of David Drysdale and Matthias Schmid, who was the top amateur at The Open Championship at Royal St. George's this year.

In the ladies' event, Charley Hull got off to a solid start by carding 5-under-par at Galgorm Castle, which puts her just two shots off the pace.

The two-time Ladies European Tour winner shot 4-under-par on her first nine holes on Thursday and she added two more birdies on the back nine to finish with a 68.

She is currently in a tie for fifth place alongside former Ladies Open champion Georgia Hall and they sit just two shots behind co-leaders Gemma Dryburgh, Jennifer Kupcho and Chella Choi.