Tiger Woods was spotted walking with crutches in Los Angeles yesterday, but he appeared to be applying pressure to his injured leg. 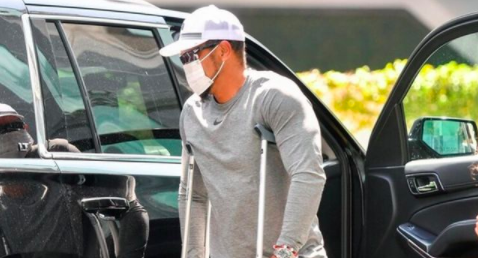 The golf world was once again warmed by the latest images that have emerged of golf legend Tiger Woods appearing to be walking on his injured leg in Los Angeles.

Woods was last seen in Los Angeles in June and on this occasion, he was also applying weight to his injured right leg, which still appears to be covered by some sort of protective clothing.

Reported first by TMZ, the 15-time major champion has again been spotted in Los Angeles but it is not entirely clear why he is back there.

It is said that Woods was seen walking on both of his feet yesterday, despite still using crutches, which is great news for all golf fans who want to see him back to full fitness as quickly as possible.

The car accident, which happened back in February, occurred in Ranchos Palos Verdes when his car veered off the road and flipped several times. Woods' car hit a tree and rolled to a halt before emergency services arrived at the scene.

Woods required surgery after suffering open leg fractures, as well as injuries to his foot and ankle. He was released from the hospital in April to recover at home.

Golf fans left their comments on the latest images of Woods:

"He’s coming back, and he will win again. I am telling you," one fan said.

"Masters 2022 champ is ready for the links!" one fan commented.

"He going to play. And my god he’s going to win," another fan said.

"He will never play professional golf again. It’s a shame," another fan commented.

"Love to see this progress," one fan said.

NEXT PAGE: RORY MCILROY: "I NEVER DREAMED OF AN OLYMPIC GOLD MEDAL"