Bryson DeChambeau was putting his clock system into place during a practice round ahead of the Saudi International. 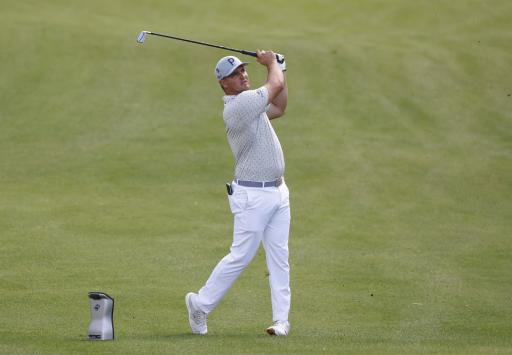 The European Tour posted an interesting video of Bryson DeChambeau discussing shot selection with his caddie during a practice round ahead of the Saudi International, where he put his clock system into action.

The reigning US Open champion uses a clockface system when hittign iron shots to determine how far he hits certain clubs.

He treats his swing like the face of a clock and will take the club back to a certain point, as if if is stopping on a specific number of a clock.

It's a system that has become increasingly popular over the past few years and one that DeChambeau has been relying on for a long time.

During a practice round ahead of this week's Saudi International, the European Tour posted a few clips of DeChambeau on their Instagram page, where golf fans were able to listen in on his pre-shot process.

"Can't believe he turned down the cookie. Thought he's trying to bulk," joked one golf fan.

DeChambeau got off to a great start in Saudi Arabia and shot a 5-under par opening round on Thursday, four shots behind leader David Horsey, who equalled Dustin Johnson's course record of 9-under par at Royal Greens Golf & Country Club.