Ewen Ferguson has hit back at a Sunshine Tour caddie who once bet £100 he would never win again as he had a short game "on par with Happy Gilmore." 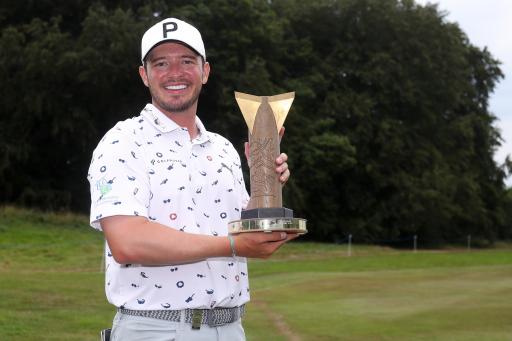 It's turning out to be quite a year for DP World Tour pro Ewen Ferguson.

If you didn't know, Ferguson is also quite an active person on social media. It's obvious that the problem with things like Twitter or Instagram is that posts can sometimes come back to haunt you.

There is absolutely no doubt the 26-year-old Scottish pro bookmarked this post for later use.

Way back in May, Ferguson was criticised on social media by Sunshine Tour caddie Chris Thiart, who loops for Malcolm Mitchell.

Perhaps justifiably, Thiart criticised Ferguson for his language during the Soudal Open. The Scot left a putt far too short. Then he let off steam in a way that Tyrrell Hatton would have been proud of.

Thiart suggested the DP World Tour fine him for his language as he accused Ferguson of being an "overgrown child."

I hope the @DPWorldTour fines @EwboF for his language. Pathetic. You shot -4 yesterday and yet decide to swear like a trooper on the broadcast. Grow up. You an overgrown Child. #SoudalOpen pic.twitter.com/UwL8UYTtpw

Thiart also went further by betting £100 that the "Scottish brat never wins again". He also claimed he had "a caddy swing" with a short game "on par with Happy Gilmore."

Haha. Of course Lewis would like ur reply. I bet you £100 the Scottish brat never wins again. Enjoy your status while u can, coz u going to be back on the challenge Tour in a couple of years. No doubt. You have a caddy swing with a short game on par with Happy Gilmore #wanker

Which brings us to August 15, 2022, a day after Ferguson claimed his second victory.

HAPPY LEARNED HOW TO PUTT https://t.co/P8QiPJxzdE

What's that saying? Something about revenge being a dish best served cold?