The Europen Tour tweeted a classic video of Seve Ballesteros as he won the 1991 PGA Championship. 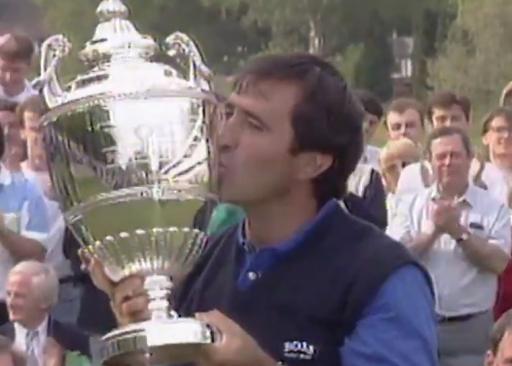 Seve Ballesteros was everything that golf fans wanted to see from a profesional golfer. Not only was he one of the best to ever play the game, but his charisma and personality were second to none.

The Spaniard claimed 90 professional victories, 50 of which came on the European Tour and thousands of golf fans came to events just so they could watch the magician in action.

This week, the European Tour heads to Wentworth for its flagship event, the BMW PGA Championship, where the likes of Tommy Fleetwood, Tyrrell Hatton, Justin Rose and Patrick Reed take to the stage.

Ballesteros won this prestigious event on two occasions, firstly in 1983 when the tournament was known as the Sun Alliance PGA Championship and then again in 1991 when it was the Volvo PGA Championship.

In 1991, the tournament went to a play-off between Ballesteros and Colin Montgomerie and a classic Seve moment was caught on camera. Watch Seve's character shine in the video below:

"Stay still if you don't mind please. I know you're nervous but so am I," said Ballesteros, making the crowd around him laugh.

It didn't take long for golf fans to start responding to the tweet, paying their respects to Ballesteros, who sadly passed away in 2011 at just 54-years-old.

"Seve is the reason I am poor, followed him at St Mellion and made me fall in love with the European Tour. Decades later I am still spending all my spare time and money travelling over Europe following it. Seve is a true legend," said one golf fan.

"Nobody didn't like Seve. What a gift to the sport."

"Seve was one of a kind. The epitome of a competitor."

"Just the best of the best, he is why I play golf."

"Never get tired of watching Seve."

"Absolutely brilliant. Oh how we miss that man."

NEXT PAGE: What time you can watch the 2020 BMW PGA Championship live on TV