Højgaard twins to team up for innovative Hero Challenge

The Hero Challenge will feature 26 teams of two professionals per team playing over nine holes in a Texas Scramble best-ball format. 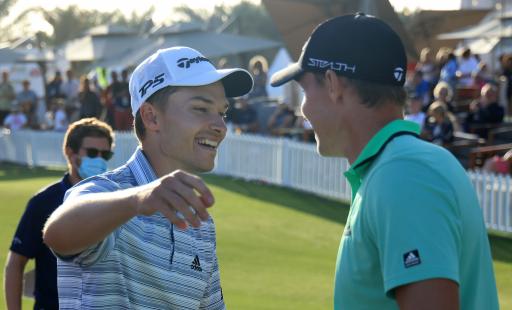 The Hero Challenge will feature 26 teams of two professionals per team playing over nine holes in a Texas Scramble best-ball format.

The event will be broadcast across the world and viewers will get a unique inside-the-ropes experience, with closer interaction between players and course commentators, and with certain players miked up throughout their round.

The Højgaards, who last year became the first brothers to each win a tournament in back-to-back weeks, are one of the many teams featuring players from the same country, with Spain’s Rafa Cabrera Bello and his Spanish compatriot Alfredo Garcia-Heredia playing in the same group as the Danes.

Marcus Armitage and Jordan Smith – a former winner in Ras Al Khaimah on the Challenge Tour, who finished runner-up to Højgaard last week – play in an all-English team while Scots Stephen Gallacher and Robert MacIntyre pair up hoping to claim the lion’s share of the $150,000 prize pot.

An all-Swedish group, meanwhile, will feature Marcus Kinhult pairing up with Alexander Björk and they will play alongside a team featuring Sebastian Soderberg and Joakim Lagergren.

"It was very special!"

Nicolai Hojgaard on that epic approach shot and his hopes of breaking into the world’s top 50 and qualifying for The Masters. pic.twitter.com/zFkxjgPteQ

“I have full confidence in Rasmus, when we play together we trust each other 100%. Maybe it sounds a bit like we’re going to take it seriously, but we’re going to have fun for sure and try do our best while we’re having fun. We’ll see what happens.”

“I’m very excited, it looks like he’s driving the ball pretty good so that should make my job a little easier!

“I think we’ll just go out and try have fun. It’s going to be a relaxed little competition. We’re here for two weeks so it’s nice to have something a little different to do, to have alittle nine hole competition is great and will just be a lot of fun.

“We’ve been talking about what we’re going to wear and maybe wearing the same outfit, it will be a little surprise I think!”