Harold Varner III has been speaking about his wild celebration after draining a giant putt from off the green to claim the Saudi International. 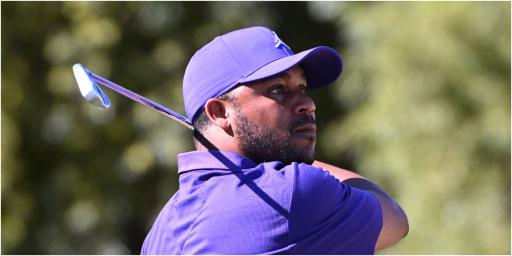 Harold Varner III has explained his bonkers celebration that saw him claim the Saudi International after draining a 92ft eagle putt.

If there was one good story to come out of last week, perhaps it was fitting Varner III claimed his first victory in more than five years.

Several of the world's elite players shunned the chance to play at Pebble Beach to play here but Varner III emerged as the unlikely winner.

Speaking to the media afterwards, the 31-year-old who is now $1million richer, explained that he has never, ever doubted his abilities.

He has been the "nearly guy" on the PGA Tour over the last few years, seeing his chances dissipate at the crucial moments.

While most opinion pieces last week took aim at players taking the money, Varner III quietly went about his business in Jeddah.

Harold Freaking Varner III with the absurdly improbable walk off eagle on No. 18 to win the Saudi International. #SaudiIntlGolf pic.twitter.com/bPKH0QtY05

It seemed as if it was destined to be another case of so near yet so far for the Ohio native, who last won in Australia in 2015.

Faced with a putt of treachery just off the green on the 18th, he needed to get down in two to force a playoff with Bubba Watson.

Yet he didn't. We know the rest by now. The first part of the putt was up a steep bank. It caught the ridge, and rolled in at a perfect pace.

Of course, his celebration was a sight to behold. Worthy of winning a major. Worthy of binning a monster putt in a Ryder Cup for a point.

We'll let the man of the moment take it from here, who was interrupted in his winner's press conference by a call from his wife.

He told her not to cry, that he loved her and it will all be okay, then he added:

"It was awesome. Obviously that it went in kind of helped. When I was coming down the hill, I for sure -- worst case scenario, we'll go to a playoff and I'd get him there.

"And then it went in, and emotions came out. I love that. When I play with my boys, that's the emotion I want to see. That's why you play. Competition, it's the greatest thing in the world."