Johnny "Long Socks" McLaren: "For the foreseeable future, I'll be at home"

Paul Casey's caddy Johnny McLaren says it is unlikely he will be carrying again unless a "world number one" comes calling. 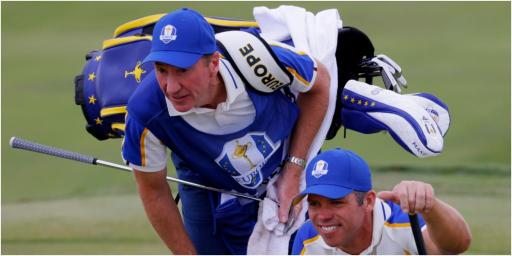 He is known for his colourful socks, but potentially we will never see them again. Johnny "Long Socks" McLaren has all but retired.

We detailed last year how McLaren was taking a break from carrying after the affects of the pandemic had taken their toll.

McLaren admitted he found the affects of travelling and the COVID-19 measures difficult, which created anxiety.

Now he has decided to bring his retirement forward. Had it not been for the virus, he said he wanted to carry on for three more years.

His socks never started out as a fashion statement. In fact, it was due to his legs being burned in a fire when he was in his early 20s.

McLaren explained that it was on the advice of his doctor that he cover them initially. But then he just stuck with it.

McLaren has been on the tour for 30 seasons and been on the bag for 18 wins, carrying for multiple players. He worked with Luke Donald during his prime and at the Miracle of Medinah in 2012.

Last year @Paul_Casey's caddie gave him the wrong club into 18.

His reaction is just as brilliant today pic.twitter.com/EKu97eZvts

McLaren told The Guardian: "My children are eight and nine. My son broke his arm during the last Ryder Cup and I wasn't there. My daughter was born during Lytham in 2012 and because of the Open, I have never really been there for her birthday.

"Covid travel became so much more difficult. I have no mental health issues but I understand that there are a lot around because of this climate.

"I am mentally more tired because of travel and anxiety of testing positive after a two- or three-week trip then being stuck in a country when I have young kids.

"Similarly, I go home and they are in school and I worried about not being able to get back out to work. That created a lot of uncertainty I'd rather not have to deal with."

Going forward, McLaren further told the publication: "Firstly, I am going to do school runs. I will be on the touchline for kids' games at school. I will be back on my bike training like I used to.

"I'll play a bit more social golf. I know for the next six to eight months there is pretty much no chance I'll be back out here unless a world number one to eight calls and says they would like my help to be better. For the foreseeable future, I will be at home."