Poulter sees the funny side after hitting a HOSEL ROCKET with his first tee shot in Dubai. 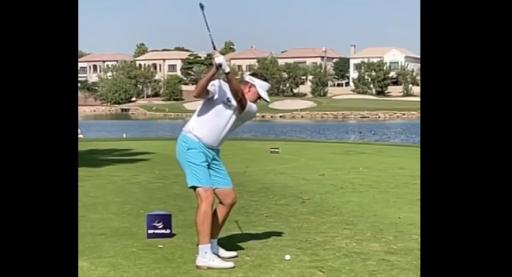 Ian Poulter posted a video of him hitting a shocking shank on the 17th hole - his first shot of the day - during a DP World Golf Day in Dubai on Monday.

Poulter closed out his 2021 season on the European Tour DP World Tour on Sunday afternoon with a solid tie for sixth at the DP World Tour Championship.

The Englishman rallied from the middle of the pack with consecutive weekend rounds of 67 to finish the week just five shots behind eventual winner Collin Morikawa.

But despite his impressive play on the weekend, it's fair to say Poulter's game was a little off 24 hours later as he shanked his ball into the ripples with his very first shot of the day in the Pro-Am shotgun start.

Poulter saw the funny side of it though as he put some hilarious audio to the shot.

Lee Westwood commented on Poulter's post: "Foursomes should be fun at the QBE Shootout."

Paul Casey replied with a crying laughter face, as too did the official DP World account.

It's not the first time Poulter has been seen hitting a shank this year.

The hosel rocket he hit on the range at the RBC Heritage may go down as one of the worst shots of his entire career.

The shot tracker only added to his woes on camera!