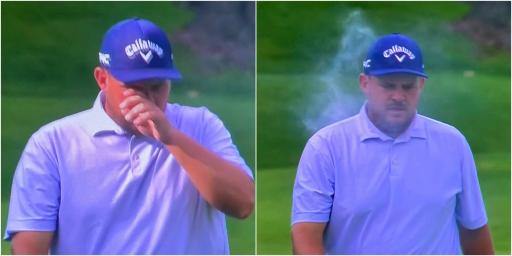 Perhaps South Africa's JC Ritchie might need to take a while to calm down after this one.

The DP World Tour pro made a brilliant hole-in-one at this week's Joburg Open at Randpark Golf Club and thought he'd won a Jaguar.

I mean after all, it does say "First hole-in-one wins the Jaguar F-Type" on the board behind him.

Unfortunately for the 27-year-old professional, the F-TYPE was only on offer to be won... at the WEEKEND.

Even the commentators were befuddled by this. They too thought he had claimed the awesome prize in his first round.

The shot itself really was stunning. At 223 yards it's not exactly an easy hole.

Ritchie, who usually plays on the Sunshine Tour and has won eight times on that circuit, looked miffed when he heard the news.

Perhaps this was in his mind as he pegged it up on the 18th as he made bogey at the last.

Ritchie was even having a cigarette down the last fairway, perhaps to relieve some stress?

Disgusting to be allowed to advertise is as a hole in one prize of you then say ‘er no-only on the Weekend!’

His round was not without fireworks. Four birdies, four bogeys, a triple bogey and an ace. That's interesting to say the least.

He eventually signed for a 1-over-par round of 71.

Well, at least he knows over the weekend that he can make a hole-in-one. Better luck next time, eh?

This is the first tournament in the DP World Tour, formerly the European Tour.

I think he’s just happy that he doesn’t have to putt on those greens!

Sad he doesn’t get the car

“First Hole In One Wins the Car” yet he doesn’t get the car because it’s only for Saturday & Sunday rounds that’s not on the advertising banner beneath the car. False advertising by the sponsor/DP World Tour #JoburgOpen