Jon Rahm opened with an 8-under-par 63 at the Acciona Open de España, which he is aiming to win for the third consecutive year. 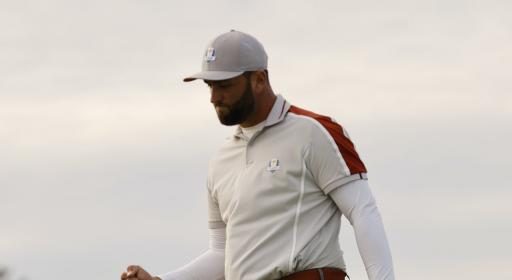 World No. 1 Jon Rahm shot a brilliant score of 8-under-par in the first round of the Acciona Open de España to sit two shots off the lead.

Rahm won this tournament in 2018 and 2019 and if he was to pick up a third victory at the European Tour event this week, he would make a significant piece of history.

The Spaniard would become the first man since Tiger Woods to win an event on the PGA Tour or European Tour in three consecutive years before the age of 27, since World War Two.

Woods accomplished this feat twice when he won the Memorial Tournament and the WGC at Bridgestone in 1999, 2000 and 2001.

"It doesn't matter what event it is, not many people have been able to win one three times in a row. So I'm hoping I can get it done. It'll truly be my honour. It's coming back home that's most important," Rahm said to the media before the tournament.

Action from Jon Rahm's opening round 63.

Rahm could hardly have started in a better fashion. Starting on the 10th hole at the Club de Campo Villa de Madrid in Madrid, he made four birdies and an eagle in his first nine holes.

Although he bogeyed the 18th hole, he added three more birdies on the back nine to finish with a 63. His fantastic record in the tournament continues and he has a great chance of making history on Sunday.

However, Rahm's scintillating round of 8-under-par was overshadowed by Ross McGowan breaking the course record. The Englishman stormed to a round of 10-under-par on Thursday.

The two-time European Tour winner made eight birdies and an eagle in a bogey-free round in Spain to finish two ahead of Rahm and one ahead of Sebastian Garcia Rodriguez.

In doing so, McGowan set the new course record and put himself in a great position to secure his second victory in the last 12 months.