The grip of Harris English's putter was in such a bad state that it was deemed as non-conforming in Wisconsin. 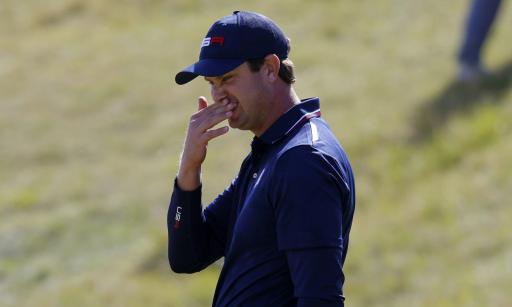 Harris English was almost the victim of an extraordinary and unexpected rules infringement during the Ryder Cup where his putter grip was called into question.

English was making his debut at the Ryder Cup at Whistling Straits and someone had noticed that the grip of his putter was in horrific condition.

There was now a question as to whether the four-time PGA Tour winner's putter was a non-conforming club in his bag.

English was baffled by these developments when he was preparing for his Sunday singles match.

Speaking on the 'Fore The People' podcast, English described the moment US captain Steve Stricker called him to tell him about the situation.

"I had no idea what he was calling me about, he hadn’t called me this whole week," said English.

"I’ve been putting with it for eight, nine, 10 years - I have no idea how long. Somehow, someone thought it made me putt better. I don’t know. I have no idea why."

It is unclear as to who lodged the complaint, but the condition of the grip was deemed non-conforming. The grip had to be changed or repaired for English to tee off against Lee Westwood in their singles match.

RELATED: "BRYSON'S STYLE WILL CHANGE GOLF FOREVER": BROOKS KOEPKA AHEAD OF THE MATCH

Enter US vice-captain and winning Ryder Cup captain Davis Love III. In just a few minutes, the 57-year-old cut off the loose parts with an X-Acto knife and the putter was good to go.

Unfortunately, English lost his match on the 18th hole to Westwood but this was a late consolation for Team Europe.

English was part of the record-breaking 19-9 win for Team USA.

NEXT PAGE: HERE'S WHY BRYSON DECHAMBEAU WAS A "PAIN IN THE BUTT" IN RYDER CUP GROUP CHAT!