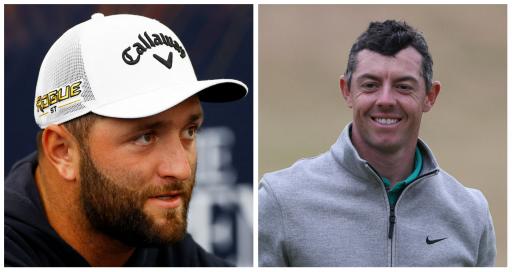 Jon Rahm fired a final-round 67 to seal a two-shot victory at the DP World Tour Championship on a day where Rory McIlroy became the season-long DP World Tour Rankings champion for 2022.

Spain's Rahm finished the week on 20-under par, enough for a two-shot victory over England's Tyrrell Hatton and Sweden's Alex Noren.

He is now hoping people give him a break.

"Hopefully people can stop telling me that it was a bad year," said Rahm.

"You know, had a second boy this year, a lot of changes at home -- it also helps. I got a lot of videos from my kids back home laughing and doing things.

"I do draw from some memories. Kelley [wife] sent me a video of our youngest when he was clapping, and that's what I was thinking on the last few holes, hopefully try to make him clap a little bit more."

McIlroy tried to mount a final-day charge but he came up short with a round of 68 and he had to settle for solo fourth in the tournament on 16-under par.

Nevertheless, McIlroy had done enough to win the season-long points race that is now known as the DP World Tour Rankings rather than the Race to Dubai.

The Northern Irishman was understandably delighted to get his hands back on the rankings title for the first time since 2015.

"It feels like a long time since I looked at that trophy, it's been seven years, and it feels just as good as I can remember, so really proud and really honoured to be standing here today," said McIlroy, who was quick to heap praise on Rahm.

"I want to say congratulations to Jon. Amazing playing this week and amazing play all year. Jon is I believe, I'd like to say I'm right up there as the best player in the world but he is right up there with me. He is such a great player, Europe is lucky to have him, and I'm looking forward to playing with him in Rome [Ryder Cup] next year.

"Too many people to thank along the way. I've created many wonderful relationships in Dubai and I love coming back here, it's like a second home to me, it's been amazing."

He added: "It feels funny not to have won a tournament all year on the DP World Tour, but it also goes to show my consistency."

Although another year went by without a major championship, McIlroy is determined to set the record straight in 2023.

"Hopefully a major championship," said McIlroy, when asked what is next on the radar.

"It's taken me seven years to get my hands on this trophy again, and it's now been eight years since I've won a major.

"If I can keep playing the way I've been playing, keep these consistent levels up then hopefully I'll give myself chances to do that.

"I just want to keep playing the way I'm playing, have great battles with Jon along the way, and if I keep up with him then I know I'll be doing okay."