Tyrrell Hatton was NOT a fan of the pin position on the 17th hole in Round 3 of the DP World Tour Championship. 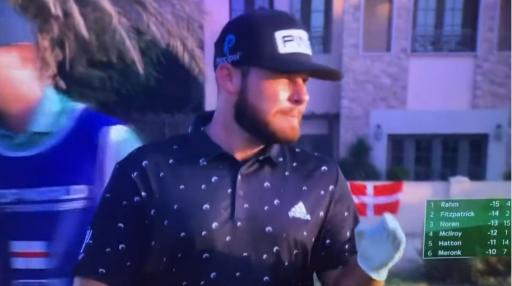 Tyrrell Hatton really is the gift that keeps on giving when microphones are around on a golf course. Some golf fans like it, others not so much. But either way, you cannot deny he is great entertainment value!

Speaking his mind on the course is what fires Hatton to do better, or so we have been told. It keeps that fire burning and more often than not helps bring the best out of his game.

Ian Poulter was very much the same back in the day, among others such as Thomas Pieters, Sergio Garcia and Jon Rahm, who have all typically never been afraid to voice their frustration in front of the camera after a miscalculated or errant stroke.

After his outrageous F-bomb on camera in Round 2 of the DP World Tour Championship, fiery Englishman Hatton was back for some more in Round 3.

There were thankfully no swear words this time, just a complete dislike of the pin position at the daunting par-3 17th that plays all across water.

Hatton found the greenside bunker with his tee shot on the penultimate hole, and then hit what we considered to be a fairly solid splash shot to within eight feet of the hole.

Unfortunately, Hatton, with high expectations as one of the best PGA Tour players in the world, did not see it that way.

As he trudged over to his bag with wedge in hand, while his caddie went the other way to rake the sand, Hatton uttered these brilliant words down the camera...

"Worst pin position, EVER!" as he picked up his bag and slammed it on the ground.

To Hatton's credit, he composed himself and drained the putt for par.

He also then went on to birdie the par-5 18th to keep himself very much in the hunt for a first DP World Tour Championship on Sunday.

Hatton is looking to win his seventh title on the DP World Tour and his first of the season.

Keep up to date with LIVE scores and updates from the final round of the DP World Tour Championship.

Next Page: Open champ agrees with McIlroy, calls for LIV Golf's Norman to be AXED!