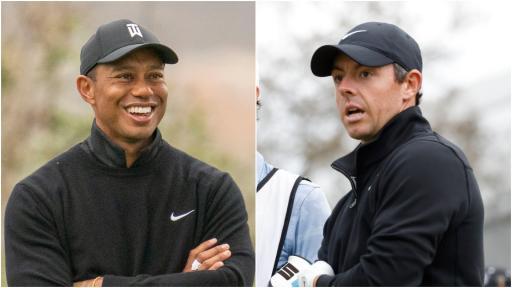 Rory McIlroy has retold a funny story of how he nearly pinched Tiger Woods' golf glove out his back pocket when attending the 2002 WGC-American Express Championship as a fan.

McIlroy was speaking to the media about his fondest memories of Mount Juliet Estate, the home of last week's Irish Open where the Ulsterman went on to finish a disappointing tied 59th.

"The last time I was on the 18th green here was during the prize ceremony when Tiger won, and I remember somehow sneaked my way, like, under the rope onto the back of the green, and I was standing right behind him and his glove was still in his back pocket," said McIlroy earlier in the week.

"I could have reached and got it and ran - that would have been a good story to tell him, but I obviously didn't!"

He added: "It was the first time I ever watched Tiger play live. I remember the first shot I ever saw him hit was a drive off the 5th hole, the par-5, and he hit a 2-iron into the green. It was really cool. I idolized him growing up and to actually see the man in the flesh was pretty exciting.

"But yeah, really good memories coming down here watching. It’s amazing that it’s been 17 years, and the tournament hasn’t been back since. Glad to be back, and certainly a lot’s changed in the last 17 years since the last time I was here."

McIlroy will now tee it up in this week's Scottish Open at The Renaissance Club, before turning his attentions to The Open at Royal St George's in Kent.