Sam Horsfield fires back at camerman after he flashes during his swing on European Tour. 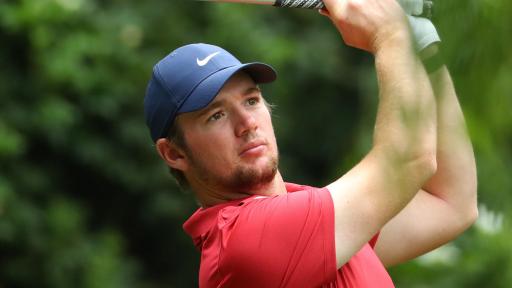 Sam Horsfield ripped into a cameraman when he took a photograph during his swing on the 18th tee on day three at the Portugal Masters.

On-course photographers are permitted to take pictures before a golfer has addressed his ball and also after the strike.

But it is an understood rule that they must not click away at impact or at least close to impact with which to put a player off their strike.

After meeting for the first time in 2011 and playing nine holes together, @IanJamesPoulter was seriously impressed by what he saw of Sam Horsfield pic.twitter.com/EaNpULntwG

Unfortunately one cameraman at Dom Pedro on Saturday got slightly too carried away when Horsfield ripped into his drive down the 18th.

The ball sailed down the right side of the hole and the Englishman, who was once mentored by Ian Poulter, instantly turned around to stare down the cameraman.

Horsfield's caddie was equally annoyed by the snap.

This stare from Horsfield went on for a good 10 seconds, and then he trudged off the tee box and said: "F***ing d***head".

He then added: "It even flashed as well."

The Sky Sports Golf commentary team then had to apologise for Horsfield's choice of words.

Horsfield went on to make par on the 18th to sign for a round of 69, and he would end up finishing the tournament on 10-under par in a tie for 12th after a Sunday 71.

A hole before the cameraman incident, Horsfield received one of the luckiest breaks of the European Tour season when his ball bounced off a stone and back into play rather than going into the water at the par-5 17th.

Despite the fortuitous bounce, Horsfield did not have the best of lies in the dirt and went on to make a bogey-six.