European Ryder Cup captain Padraig Harrington called in the rules official at the Portugal Masters to report an issue with an insect on the green. 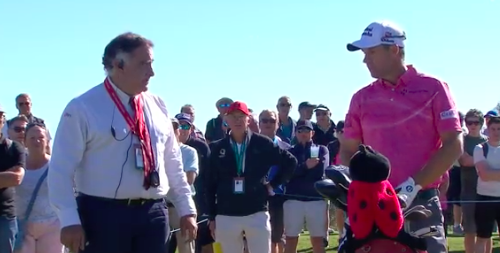 European Ryder Cup captain Padraig Harrington was involved in a strange rules issue during the second round of the Portugal Masters, which was won by Thomas Pieters.

On the second hole at Dom Pedro Victoria Golf Course, Harrington had a short putt for par which he safely rolled into the bottom of the cup.

However, as his ball caught the lip and fell in the cup, what looked like a moth or a butterfly came off the ground and flew away.

This caused Harrington to call in a rules official because he was uncertain as to whether his ball hit the insect, which could have resulted in the putt being taken again.

"The ball was going into the lip - you know what, this could be a second apart, but it looked really close. The butterfly kind of went away from the ball, but I don’t think they made contact," Harrington explained.

As unusual golf rulings go...@padraig_h was involved in a bizarre ruling today with a butterfly. #PortugalMasters pic.twitter.com/HtaB9BlCmm

According to Rule 11.1b, if a ball on the green is hit and comes into contact with another person, animal or moveable obstruction then the shot does not count.

The Irishman would have to put his ball back in position and take the putt again. After the rules official watched footage of the putt, it was judged that his ball did not make contact with the insect.

It was very honest of the three-time major champion to call the situation on himself, but it does appear that the insect was startled by the ball and didn't actually touch it.

RELATED: HOW PATRICK CANTLAY INSPIRED JUSTIN THOMAS AFTER A ROUGH START IN MAYAKOBA

Harrington last won on the European Tour at the Portugal Masters in 2016 and he had another good week in Vilamoura by finishing tied 12th.

This was the 50-year-old's highest-placed finish of 2021 since he impressively finished tied fourth at the PGA Championship in May.

NEXT PAGE: HOW MUCH MONEY DID EACH PLAYER WIN AT THE WORLD WIDE TECHNOLOGY CHAMPIONSHIP?