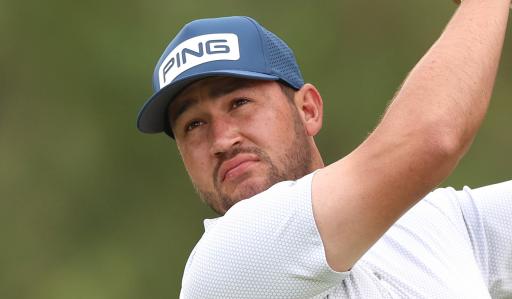 Thriston Lawrence has become the first South African to be crowned Sir Henry Cotton Rookie of the Year, after a breakthrough season on the DP World Tour that included two wins, six further top tens and a major debut.

A previous winner on the Sunshine Tour, the 25 year old made the perfect start to the 2022 season with victory in the opening tournament - and the first since the European Tour became the DP World Tour - at the co-sanctioned Joburg Open, where he is defending his title this week.

His breakthrough victory not only secured a DP World Tour exemption, it also led to his first appearance in a major as part of The Open Qualifying Series, and he went on to finish inside the top 50 at the historic 150th Open at St Andrews.

A first professional victory on European soil followed in August when he secured the Omega European Masters title in a play-off triumph over England’s Matt Wallace at the iconic Golf Club Crans Montana in Switzerland.

That win led to another landmark, as he moved inside the top 100 in the Official World Golf Ranking for the first time in his career.

Lawrence racked up six further top tens, including a tied second finish at the Magical Kenya Open presented by Absa and third place at the Horizon Irish Open, on the way to finishing 14th in the DP World Tour’s season-long rankings.

“It’s a dream come true. If you look at the names on the trophy, it’s incredible. A year ago I didn’t even have a category, so when I started off with a victory, it came to mind straight away to go for this award. To have accomplished it is an incredible feeling - I’m very grateful and honoured,” said Lawrence.

“It was very special to get the first win at the Joburg Open. This was where my life changing dream started, and I’m honoured to be defending here this week.

“That win opened up so many doors for me. It gave me a winner’s category, gave me the chance to play big events like the Rolex Series and my first Major at St Andrews, where golf started.

“Winning twice was incredible, and it’s not where I want to end. It’s a balance between being strict on yourself, sticking to your routine, having good support behind you. It’s not just me, it’s a whole bigger team. Onwards and upwards from here.”

Keith Pelley, the DP World Tour’s Chief Executive Officer, said: “I would like to congratulate Thriston on being named Sir Henry Cotton Rookie of the Year after a truly memorable debut season.

“Our Tour has been graced by many fantastic players from South Africa over the years, which makes it even more special that Thriston is the first of his countrymen to win this award and join the prestigious list of international winners. We look forward to watching his career unfold on the DP World Tour in the years ahead.”

“Winning the first event of the season opened up so many doors for him, but he didn’t take his foot off the gas, and it was a great achievement to follow that up with another win in such a historic event just a few months later.

“I’m sure there is more to come, and I look forward to seeing Thriston on Tour in the coming seasons.”