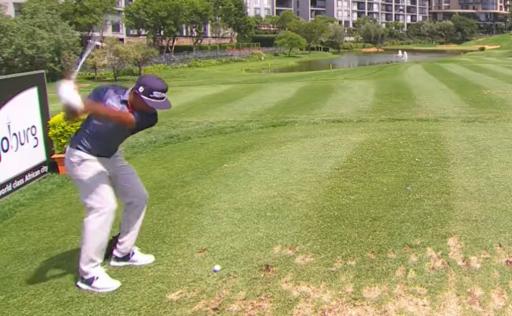 Sunshine Tour pro Keenan Davidse hit a horrifying golf shank during round one of the Joburg Open on the DP World Tour, and it led to a costly triple-bogey six.

The ball sailed out of bounds into room 101, and Davidse had to play three from the tee.

He would go on to make a triple-bogey six.

We've all been there, Keenan! Far too many times for my own liking in fact.

Taking a quick peek at the leaderboard, and Davidse is sadly well down the board in the second round at time of publication at 4-over par for the tournament with just a handful of holes left to complete on Friday. He is going to miss the cut.

Davidse has had several top-10 finishes on South Africa's Sunshine Tour but has yet to win this season.

The Joburg Open is co-sanctioned by the DP World Tour and Sunshine Tour this week.

England's Dan Bradbury has set the early 36-hole pace with a blistering 13-under-par total following rounds of 63 and 66.

Home favourite Christiaan Bezuidenhout is hot on his heels though heading into the weekend at 10-under par.

The DP World Tour is also co-sanctioning the Australian PGA Championship with the PGA of Australasia this week.

LIV Golf star Cameron Smith is, as you would expect, firmly in the mix heading into the weekend at just one shot behind Australian compatriot Jason Scrivener.

Next Page: Jon Rahm will not be best pleased when he learns how many spots Tiger Woods can rise in the OWGR with a win