McGinley blasts strategic alliance critics: "It's not deserving and it hurts!"

Paul McGinley has hit back at claims the DP World Tour is becoming a feeder circuit to the PGA Tour after the emergence of LIV Golf. 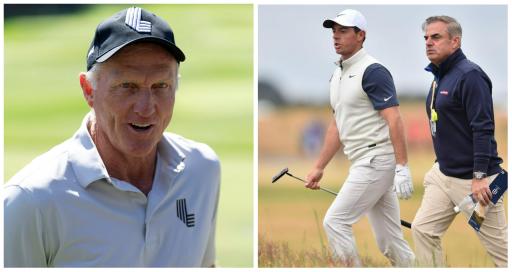 Former Ryder Cup Europe captain Paul McGinley has hit back over claims the DP World Tour's strengthening of their ties with the PGA Tour is hurting the circuit as a result of LIV Golf.

Even before the emergence of LIV Golf, the DP World Tour - formerly the European Tour - partnered with their American counterparts in 2020 with the announcement of a "strategic alliance".

After the breakaway tour came onto the scene, the European-based DP World Tour and PGA strengthened that commitment further with the announcement of extending that alliance through to 2035.

Related: Paul McGinley calls for Presidents Cup to be mixed

Part of that partnership saw the Americans increasing their share of European Tour Productions from 15 per cent to 40 percent.

Pelley said in June the move would significantly enhance "the meritocracy that has served the professional game on both sides of the Atlantic for more than 50 years".

"It is a natural extension and progression of what we have been doing over the past few years and I passionately believe that this move is the right thing for our players, our tour, our fans, and the game of golf in general."

It's also clear that some DP World Tour members stand to benefit more than others as a result of this alliance.

From the start of next year, the top 10 in the rankings - which was re-named this week - will earn a PGA Tour card for the following year.

Pelley insists this is not the case.

McGinley was asked about this topic by the Times of London.

In response to the query that DP World Tour chiefs have "ceded too much power to the PGA Tour", he said:

"The comparison back to the good old days of Seve [Ballesteros] and [Bernhard] Langer is very unfair because the dynamics of golf have changed and the European market is totally dwarfed by the American market.
"Playing schedules have changed and we are working with cards that have been played with us. There are some very clever business people on that board — I don't mean me — and to be dismissed so easily as making stupid decisions is disrespectful. It's not deserving and it hurts."

It should be noted that McGinley, 55, was appointed to the DP World Tour's board of directors in 2016.

He has always been outspoken on the topic of LIV Golf.