Tommy Fleetwood struggles during One Club Challenge on European Tour

Tommy Fleetwood drew the short straw in the European Tour's latest One Club Challenge video and had to play the hole with only his putter. 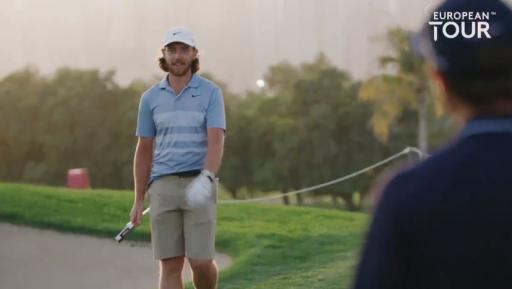 The world's best players can do some pretty impressive things with a golf ball, but even they have their limits, as Tommy Fleetwood found out in the latest edition of the European Tour's One Club Challenge.

The three took turns to pick a card which informed them of which club they had to take on the hole with.

The rules for the One Club Challenge are simple. Each player must complete the hole using only one club. That probably didn't need explaining did it?

As talented as Fleetwood is, the current world No.21 found out that playing a nearly 400-yard hole with just a putter is far from easy.

WATCH THE LATEST ONE CLUB CHALLENGE VIDEO BELOW:

Ever get that feeling you’ve been stitched up?! #OneClubChallenge #ODDCpic.twitter.com/pq3Yd6CYYt

The 7-iron was most definitely the best club to draw in the challenge, due to it being one of the more versatile clubs in a golf bag and it was no surprise to see Herbert win the latest challenge.

Arnaus started well with the driver and after finding the fairway from the tee, the second shot posed a more challenging threat, with his bump and run effort chasing through the green.

Fleetwood's tee shot with the putter was his best shot throughout the challenge, but things got messy as he got closer to the hole, with the rough causing the Englishman so many problems, he decided to give up.

This week, the players head to Saudi Arabia for the Saudi International, where Fleetwood will play alongside Bernd Wiesberger and Phil Mickelson in the opening two rounds.