Brooks Koepka is still a free agent in the golf equipment world as he goes in search of landing a third US PGA title in four years. 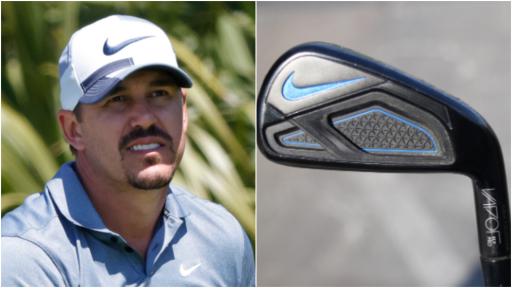 Brooks Koepka will go in search of landing a third US PGA Championship title in the last four years when he tees it up alongside Phil Mickelson at Kiawah Island on Sunday evening, and he will do it with a very mixed bag of golf clubs.

The World No.13 finds himself one shot back of 54-hole leader Phil Mickelson heading into the final round of the 2021 US PGA Championship.

The big-hitting American may have lost his way on the PGA Tour the past couple of years, but he bounced back to form with victory at the Phoenix Open earlier this season and he now has his sights set on jumping back on the major bandwagon.

While still a free agent in the golf equipment world, the advantage for Koepka is that he is can pick and choose the golf clubs he wants to play.

The top end of his bag is led by a new TaylorMade SIM2 driver in 10.5 degrees, however, he has stuck with an older TaylorMade M2 Tour HL in 16.5 degrees when it comes to his 3-wood.

Incredibly, Koepka still stands by his trusty Nike Vapor Fly Pro 3-iron, which has been in his bag for nearly seven years now. He has tested other 3-irons in the past, but they have not lived that long in his bag, and the old-school Nike iron is his preferred choice as his longest iron.

Koepka has recently made the switch into Srixon ZX7 irons from 4-iron through to pitching wedge. These stunning player irons have received rave reviews from our equipment editor Alex Lodge this season, so we can certainly see why Koepka has decided to bag these in 2021.

On the greens, Koepka uses his trusty Scotty Cameron T10 Select Newport 2 putter and a Titleist Pro V1x ball, which he has used for a number of years on the PGA Tour.