Phil Mickelson CRACKED TWO CLUBS before the final round of the US PGA!

Mickelson reveals he was forced to ring some equipment changes ahead of the final round at Kiawah Island... 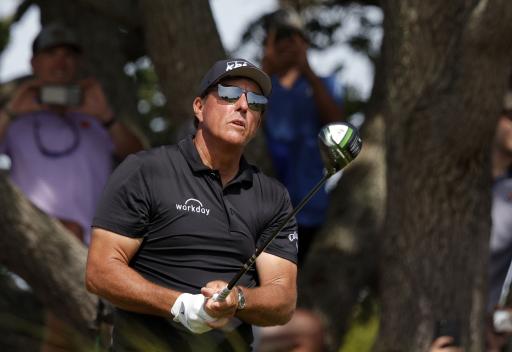 Phil Mickelson has revealed he cracked two of his golf clubs prior to the final round of the US PGA Championship at Kiawah Island.

Despite the equipment glitches, Mickelson, 50, went on to land a sixth career major title and become the oldest ever major champion in the process.

While there had been conflicting reports heading into the final day as to exactly which golf club Mickelson needed to switch up before his final-round tee-time with Brooks Koepka, it was clarified by Mickelson in his Sunday press conference that there had indeed been two equipment cracks in his bag over the weekend.

Mickelson explained how the face of his TaylorMade Original Mini One driver cracked during Saturday's third round, and he was forced into replacing it with a backup ahead of the final round.

RELATED: MICKELSON USED TWO DRIVERS TO WIN THE US PGA!

The World No.32 also had to ring another change where his Callaway 2-utility iron was concerned as that face also cracked while he was warming up on the practice range just 15 minutes prior to his tee time.

Mickelson told the media he had a backup Callaway Mavirk Sub Zero 4-wood that he could hit similar distances to his 2-iron with, and after a quick dash from his caddie and brother Tim Mickelson to go and pick up the club from his locker, Mickelson stuck that in the bag.

Lefty explained he used his replacement 4-wood on the 3rd and 4th holes in the final round.

"Little things happen, but yesterday, I hit a couple of squirrelly shots on 12 and 13 and the face on my 2-wood flattened," said Mickelson after his victorious final round of 73 saw him finish 6-under par and two shots clear of Koepka and Louis Oosthuizen.

"Fortunately, I had a backup head and swapped it out and hit it great today.

"Then as I was teeing off today my 2-iron face cracked. I mean, just you can’t swing it as hard as I hit it and not expect them to crack... I’m kidding.

"Tim noticed when I put it back that it had cracked across the face. It happens. In fact, if it doesn't happen, you start to question the manufacturer, ‘Hey, aren't we making this as hot as we can.’

"It's certainly part of it, but fortunately I had a 4-wood that's a very comparable club to that 1-iron distance-wise and I was able to use that club effectively. I used it off 3 tee, 4 tee.

"There were a few times that I hit it and I hit that club very well. It's just one of those things that happens, and you just have to be prepared for it, which is why I bring backup clubs out here."

NEXT PAGE: BROOKS KOEPKA FUMING WITH PHIL MICKELSON'S SEA OF FANS DOWN THE 18TH HOLE

Previous
Phil Mickelson reveals FASTING is the key behind his US PGA success!
Next
Golf fans react to viral video of Brooks Koepka EYE-ROLLING Bryson DeChambeau