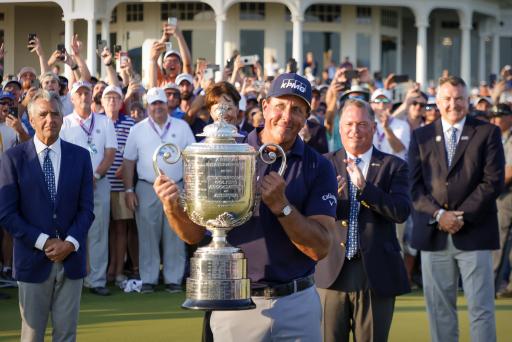 Phil Mickelson has become the oldest major winner in history following an emphatic two-shot victory at the US PGA Championship at Kiawah Island - and he did so with a very interesting setup that included two drivers.

Mickelson has often chopped and changed his clubs over the years but last week at Kiawah Island, he decided to put the Callaway Epic Speed driver in his bag.

WATCH OUR VIDEO REVIEW BELOW

The now six-time major champion put this particular club in his bag to gain extra distance, and that seemed like a good idea as the Ocean Course was the longest course to ever host a major championship.

Mickelson's distance was there for all to see under the pressure when smashing his ball down the middle of the fairway 366 yards on the par-5 16th en route to making a birdie that ultimately proved good enough for the win.

Incredibly, Mickelson's Callaway Epic Speed driver is actually a 6-degree club that is set to 5.5 degrees, and he uses a Fujikura Ventus Black 6TX shaft.

As reported by Golf Digest, the driver has a lower centre of gravity that helps Mickelson keep his spin rate low, which is vital at a venue such as Kiawah Island.

The left-handed legend has also been using what appears to be a "second driver", too.

Mickelson also relied on a TaylorMade Original Mini One driver, which is an 11.5-degree club designed to give players control away from standard drivers and 3-woods.

"I have been using it (the second driver) a reasonable amount," said Mickelson.

"Certainly, on holes like 1 and 3 and holes that I want to keep it down and don't have a lot of forced carry. But into the wind on the holes coming back, like 15, 16 and 18, I've had to use driver because I need a little bit more carry out of it.

"It's a nice club for me to have when I feel a little bit uncomfortable because I can get it on the ground quicker and the miss isn't too bad."

PHIL MICKELSON: WITB AT THE US PGA

NEXT PAGE: PHIL MICKELSON WINS THE US PGA