Brooks Koepka on the verge of signing for Srixon? This image suggests maybe...

Brooks Koepka is spotted with Srixon irons in his bag ahead of The American Express this week... 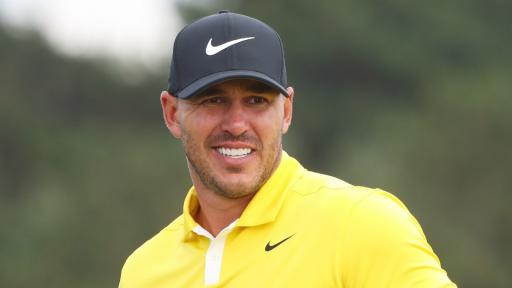 Brooks Koepka has been a free agent in the golf equipment world for a while now, but that might be about to change judging by a photograph that has just surfaced on GolfWRX's Instagram account ahead of this week's The American Express event on the PGA Tour.

Koepka's new bag appears to feature Srixon ZX7 irons. Take a look at the image below to make your mind up at Koepka's choice of clubs for the start of 2021:

"Rumour has it that former World No. 1 Brooks Koepka has inked a deal with Cleveland/Srixon to play its Z-Star XV ball, ZX7 irons and Cleveland Zip Core Wedges," reads a report on GolfWRX.

"Koepka showed up to Palm Desert with a new set of irons with Tour Issue X100 shafts, a Srixon utility, and his trusty Nike Vapor Pro 3-iron and TaylorMade M5 driver with an MCA Diamana D+ Limited 70 TX shaft."

The American had previously been using Mizuno irons, and he won all four of his career majors with them too, along with moving to World No.1 for the first time in his career.

However, judging by his new bag for 2021 there appears zero sign of Mizuno irons and instead Srixon ZX7 irons have taken the honour.

Whether or not this means Koepka will sign an equipment deal with Srixon is anyone's guess, but perhaps this explains a certain tweet that was sent yesterday by a lady working on the marketing front for Srixon and Cleveland Golf:

Perhaps Koepka has made a good choice - after all, GolfMagic Equipment Editor Alex Lodge considered the ZX7 iron to be one of his favourite player irons on the market right now.

"The ZX7 irons provide an unbelievable ease of workability and suprising amount of forgiveness for a player iron," says Alex. "It's arguably the best player iron you might not be thinking about right now."

Social media has been quick to react to the post. Here's a look at what a number of golf fans are saying, with many in favour of the move should it transpire:

"The sales of ZX7s are about to sky rocket - well done Srixon, best irons around!"

"Srixon stock is about to fly!"

"I've been playing Z745s since they came out... best irons I've ever hit. Can't wait to try the ZX7 irons and the driver."

"He will never get rid of that Nike driving iron!"

"Wonder if Brooks will be playing a Srixon ball, too?"