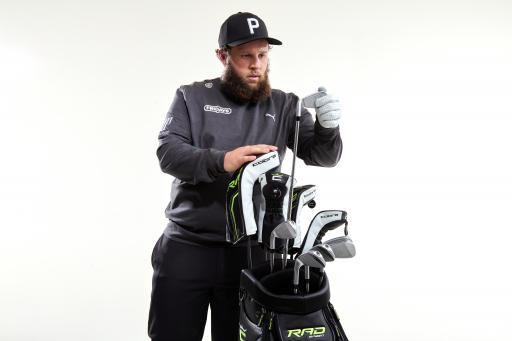 COBRA Golf, a leader in golf club innovation, today announced the newest member to its tour team and announced a partnership with European Tour winner Andrew ‘BEEF’ Johnston that will see him playing COBRA clubs, whilst continuing to wear PUMA Golf apparel, footwear and accessories on the course for 2021 and beyond.

Johnston will play a full bag of COBRA clubs including the new COBRA RADSPEED Driver and metalwoods line up for 2021.

Ben Hughes, General Manager PUMA UK&I commented: “We’re delighted to have the opportunity to expand our relationship with Andrew, He is a man who needs no introduction, and his personality and charisma perfectly embodies our mantra of game enjoyment. We’re excited to work alongside BEEF and watch him continue his progression whilst showcasing our COBRA clubs, and PUMA apparel and footwear on the European Tour in 2021 and beyond.”

Johnston enjoyed a successful amateur career, representing England boys and the Great Britain and Ireland team in the Jacques Léglise Trophy. He turned professional in 2009 and won for the first time that year on the Jamega Tour.

In 2011, He played in his first European Tour event at the Alfred Dunhill Championship in South Africa, and qualified for his first major championship, the Open Championship, via local final qualifying at Royal Cinque Ports. Johnston also recorded several good results from invites to the Challenge Tour, including a runner-up spot at the M2M Russian Challenge Cup. That qualified him for the Grand Final, where he finished in a tie for third to jump to 15th in the standings and secure a place on the European Tour for 2012.

His 2016 started in January with a 4th place at the Qatar Masters, after which Johnston earned his first European Tour win at the 2016 Real Club Valderrama Open de España. He went on to on secure two other top 10 results at the BMW PGA Championship and at the 145th Open Championship, where he enjoyed remarkable popularity for his look, personality and game.

On signing with COBRA Golf, Johnston said: "I’m really excited to become a part of the COBRA Golf team. I’ve loved being part of the PUMA family and the new 360 partnership is going to be awesome. The new equipment is amazing, and I can’t wait to use the new RADSPEED. I also get such a good, close team feeling here too which I love."

Ian Bird, World In Motion Agency commented: "We are delighted to confirm Andrew has signed with COBRA Golf to complete a 360 deal with COBRA PUMA Golf. This is a great partnership and with COBRA PUMA Golf continuing to push the boundaries within the golf market this is a fantastic fit for all concerned."