In this video, Alex from GolfMagic tests out the best golf drivers of 2021, to see how long they really are. 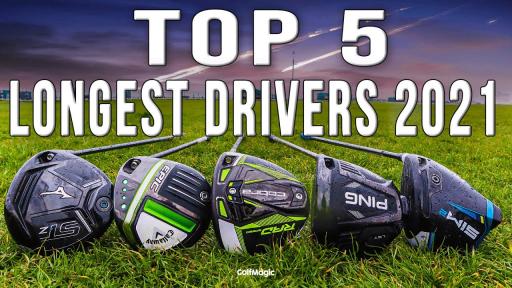 There have been some fantastic new drivers released in 2021 and we've been lucky enough to get our hands on most of them and put them to the test to give you guys all the details you need about the latest releases. They all offer something unique and picking a new driver relies heavily on what it is you're looking to get out of it, but some definitely go further than others.

The latest drivers are used by multiple players on the PGA Tour, depending on which brand they're signed with, although there are some free agents out there who have the freedom to choose which driver they'd like in their bag.

In terms of distance, modern-day driver technology has allowed brands to produce drivers that go further than ever before, which not everyone is too pleased about, but that's a whole other subject.

But which driver in 2021 is the longest? Well we've narrowed it down to five drivers that have produced incredible numbers from testing and our equipment editor Alex took them down to the Swing Suite to see which driver will be named 'Longest of the Year'.

WATCH OUR LONGEST DRIVERS TEST BELOW:

Arguably the best looking driver that PING has ever produced and we were surprised not to see it finish higher in the top three, but with an average distance of 301.6, it still packs a punch and its level of forgiveness is possibly the best of the lot.

The Callaway Epic Speed produced the fastest average clubhead speed at over 118mph, but the ball speed let the club down for distance. The spin rate was somewhat inconsistent which didn't help, but perhaps if this driver was fine tuned a little bit more it could take the No.1 spot.

A relative underdog for this test, the Mizuno ST-Z should be a real contender for anyone looking for a new driver this year. The spin rate is exceptional and it is definitely one of the most consistent performers we have tested, but not enough to take the 1st or 2nd spot.

The earliest release out of the five and one that many have forgotten about, but this comes in at No.2. Great overall numbers for clubhead and ball speed and with the price as well it's certainly a driver that you should try if you're looking for a new big stick.

The winner by a few yards which isn't surprising to many. This driver has everything and really shows that TaylorMade are on top of their game. Not the fastest clubhead speed but the ball speed consistently outperformed every driver, which is a trend we have seen with TaylorMade in the SIM and SIM2 line.