In our latest equipment video, Alex from GolfMagic compares the new Cobra RADSPEED driver to the 1997 King Cobra Deep Face driver, once used by Tiger Woods. Plus, we reveal how you can WIN a brand new RADSPEED driver from Cobra! 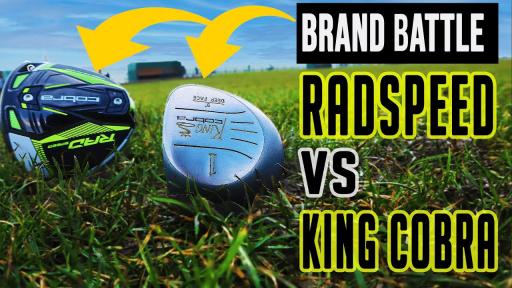 GolfMagic is back with another driver head-to-head, but this time it's old versus new as we put the Cobra RADSPEED driver currently used on the PGA Tour by Bryson DeChambeau and Rickie Fowler, up against the King Cobra Deep Face driver, launched in 1997 which was once used by Tiger Woods.

It's safe to say that drivers have come a seriously long way over the past 24 years, but how will these drivers perform when put up against each other?

Our equipment editor Alex recently took the two Cobra drivers to the Swing Suite at Croham Hurst Golf Club, to see just how much driver technology has changed since 1997 and how it affects performance.

We will also be giving away a brand new Cobra RADSPEED driver! So make sure you watch the video to find out how to enter.

WATCH OUR COBRA DRIVER BATTLE IN THE VIDEO BELOW:

When it comes to looks, this is nothing like comparing two drivers from the modern era.

Clubheads on drivers have changed dramatically and the 1997 King Cobra driver looks more like a modern day fairway wood due to its small clubhead size.

The classic driver from Cobra isn't an ugly one by any means and at its time of release it was one of the better looking drivers around, but it doesn't come close to the fantastic aesthetics of the RADSPEED.

Looking down at the King Cobra Deep Face and seeing a block of steel without an ounce of carbon, it doesn't exactly fill you with confidence and it makes you realise how good Tiger Woods and other players in that time were to not have the use of all the modern materials and technology we see in the drivers of today.

It's probably not fair to say that the King Cobra Deep Face feels horrible, given that it's 24 years old and the technology at that time was limited, but simply put, it's not nice to hit.

The sweet spot is so small that hitting this driver pure out the middle is extremely difficult, for amateur golfers anyway.

Brands have spent millions of dollars on investing in the very best driver technology to improve feel and performance across the entire clubface and the RADSPEED driver is up there as one of the very best in 2021 in that category.

The King Cobra Deep Face driver was one of the most unforgiving clubs we have ever tested on GolfMagic, but on the rare occasion that Alex did catch the ball out the middle of the clubface, the numbers in terms of speed and distance were very impressive, with Alex's biggest drive reaching 318 yards.

When we think about modern drivers, we assume that they've come a seriously long way in distance, but after putting these two drivers up against each other, it feels as though that's not the case.

Yes, drivers in 2021 go further than drivers from 1997, but it's more about the forgiveness element and how much distance we are able to get out of modern drivers when we don't hit the sweetspot.

Tiger Woods clearly has the ability to find that sweetspot pretty much every time he swung that club 24 years ago, but I'm sure he's glad that driver technology has come such a long way since.

As we mentioned earlier, we will be giving away a brand new Cobra RADSPEED driver, so make sure you watch the video where Alex gives you all the details on how to enter.