GolfMagic Readers discuss the oldest clubs in their golf bags heading into 2021... 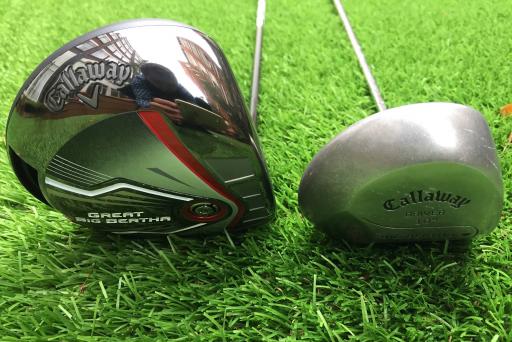 Golf brands might currently be dropping their hottest new golf equipment for the year ahead, but we wanted to ask our readers this week about the trusty old clubs in their bags that have stood the test of time.

We posed the question to GolfMagic Readers on our Facebook page this week, asking: "What is the OLDEST golf club currently in your bag?" It's fair to say we had a wide range of answers, many of which go further back than Woolworths.

Take a look at some of our best responses, and if you would like to get involved in the debate, you can do so by heading over to our social media channels now.

What does a TaylorMade Custom Fitting Experience look like in 2021?
Dustin Johnson changes putter and uses new shaft for first time in his career

"The oldest golf club in my bag right now is a 1990's Scotty Cameron Newport 2.5," said one GolfMagic Reader. "I rotate this with my Odyssey 2-Ball putter when it stops behaving and I have to send it to the garage to have a good think."

Another reader commented: "Got a wooden shafted Niblick wedge still in my golf bag. I got it from a jumble sale lot that me and my brother kept. I had it 45 years and it's still standing the test of time."

One reader wrote: "I've still got a Ray Cook Putter that I must had around 36 years now. The number of comments I get when playing club competitions about my putting is always pretty good."

"I've got a TaylorMade RBZ Tour driver from about eight years ago, still can't find a driver that I hit straighter," said one reader.

"My oldest club is a White Hot Sabertooth mallet putter," said another reader. "I've only ever changed the grip on it - absolutely incredible putter."

"I still use Lynx Parallax irons from 1988," said another reader. They are the best irons ever made in my opinion."

Another said: "I've still got a TPA Wilson Putter in my bag. I've used it for around 28 years."

"Believe it or not I still use the Original Big Bertha Driver from the early 90s," said one reader. "I don't play much to be fair - can't afford new gear - but I love a throwback club, especially as it was handed down to me from my grandad."

"I've got a trusty Cobra Baffler 3 Hybrid in my bag, absolutely love it," said one reader.

"My oldest club is from about six years ago - Great Big Bertha from Callaway, seriously good club," said one reader.

"My oldest goes back five years with the Nike Vapor Speed fairway wood - I've tried loads of new fairway woods recently but I still hit better golf shots with this one so I'm still not ready to change it anytime soon."

"I've got an Aero Burner driver from TaylorMade from about five years back," said another reader. "Absolutely love it. I can't afford a new driver to be honest, but I'm more than happy to stick with it for now."

One reader said: "I've got a Scotty Cameron Futura putter that I purchased quite a long time ago now. I wouldn't leave my house without it."

"The oldest clubs in my bag are two TaylorMade SLDR hybrids from 2014," said one reader.

Another reader said: "I still use my deceased father's PING Anser putter. It's priceless to me."

"I've still got a trusty Mizuno TP11 1-iron," said one reader. "It's very convenient under the wind!"

"I'm going way back with the 8802 putter from Wilson," said another reader. "Superb putter."

"It's a Dean Richardson Pinseeker Lob Wedge for me - proper old school," said one reader.

"I still use an Arnold Palmer Brass Putter, which has got to be from about 1956," said one reader.

Thanks for all your comments - keep them coming in, we really love to see what clubs are in your bags right now? Played with any new gear? We'd also love to hear about that, so come and join the debate over on our social media channels - Facebook, Twitter and Instagram - and also on our YouTube Channel to keep on top of all the latest equipment reviews.