We compare two of the most impressive drivers to hit the market over the last few years, the TaylorMade M5 from 2019 and the TaylorMade SIM from 2020. 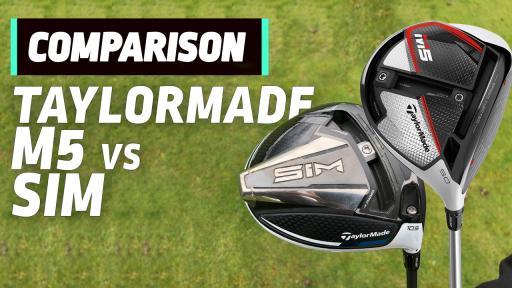 TaylorMade has been the pioneer of driver technology for years and while there are plenty of phenomenal drivers on the market, when it comes to big sticks, you’ll struggle to find better than this brand.

Over the years, TaylorMade has launched some incredible drivers, packed full of technology that has proved to be successful in the hands of Rory McIlroy, Dustin Johnson and co.

Buying a driver is a very personal thing and it's crucial to get custom fitted before making a decision on which driver you're going to put in the bag.

Watch the video below where we compare the technology, looks and performance of the TaylorMade M5 and SIM drivers.

Last year, the M5 driver hit the market and proved to be one of the most impressive drivers that we have EVER tested.

We were introduced to Speed Injected Twist Face for the very first time, which meant that every M5 driver produced was pushed to the very limit of legal speed, making the driver you buy, just as fast as the ones the Tour players were using.

This was done by designing a thinner and more flexible face which is initially above the legal speed limit and then injecting resin through the face to tune each driver to the very limit of speed.

The design of the M5 was sleek and fierce. The blood orange contrasted beautifully with the carbon crown to make the M5 one of the best looking drivers of 2019. At address it was everything you want in a driver, appealing to hit and great to look at. The M5 was topped off with the powerful thud sound it makes, something we had never heard from a driver before.

A year later and we didn’t know how TaylorMade could raise the bar, but when we saw the SIM, we were blown away.

From a design element, the SIM was another step up from the M5. The chalk-white top line combined with the carbon crown and blue details is in our opinion the best colour combination we’ve seen from TaylorMade and at address it’s even more appealing than the M5.

Now SIM stands for Shape in Motion and TaylorMade have created a clubhead that glides through the air like never before.

The SIM driver features a raised crown and sole to reduce airflow throughout the swing, while the Inertia Generator has been placed low and back with a heavy steel weight at the rear to optimise launch and increase forgiveness.

It features a sliding 10g weight so you can adjust the driver to provide a fade or a draw bias, which combined with the Inertia Generator gives you a highly forgiving AND adjustable driver, a lethal combination.