Li lights up Dubai Desert Classic: in the bag 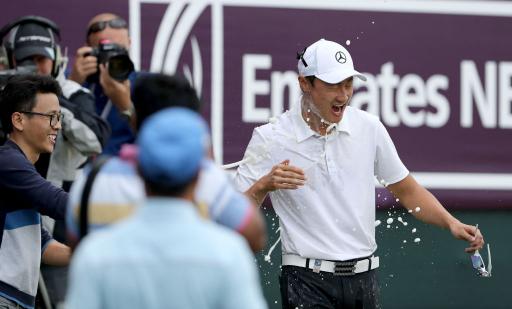 Haotong Li held off a resurgent Rory McIlroy at the Dubai Desert Classic to finish one-stroke ahead of the four-time major champion.

The 22-year-old finished on -23, a record for the event, becoming the first Chinese player to enter the world’s top 50.

McIlroy looked set to take the trophy when boasting a two-stroke lead with six holes to play, but was unable to answer Li’s four birdies coming home - “I’m pissed off” was McIlroy’s assessment.

This was Li’s second win on the European Tour, after he picked up the Volvo China Open in 2016.

“I don’t have many trophies at home so I don’t mind trying to lift this massive one,’ he said. ‘It was incredible to play with Rory and beat him, and I learned a lot.”

Previous
Watch: John Daly Interview
Next
Tiger Woods: 'I showed heart and fought my tail off'