Alex from GolfMagic compared the new generation of the TaylorMade P790 irons and the Mizuno JPX Hot Metal Pro irons. 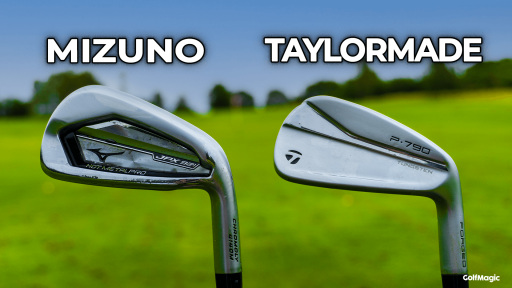 TaylorMade have certainly impressed a lot of golfers with the newest generation of their P790 irons, improving on the last version which was released in 2019.

A key difference between the two models is the flight that the new TaylorMade P790 brings to the table. The 2021 generation gives you a tour flight and this also stands out when they are compared with the Mizuno JPX Hot Metal Pro irons.

The design of the new P790's looks similar to the P770's and the P7 MC's and they also look very similar at the address when compared with the Mizuno clubs.

The Mizuno irons have a slightly larger head and the design is more commercialised and louder than the TaylorMade P790's. There is a lot more variation in the clubhead of the JPX Hot Metal Pros, but this is not a negative observation.

The Mizuno irons are arguably more suited to a higher handicap golfer who is looking for an increase in distance with his clubs and a soft feel off the clubface as well.

The JPX Hot Metal Pros tick a lot of boxes in terms of forgiveness and feel. The ball comes away hot from the clubface and this results in longer distances.

We believe that the TaylorMade P790 is suited to a range of golfers, whether they have a high handicap or a low handicap and you could argue that this is what makes these clubs a cut above the rest.

The flight of the golf ball has been vastly improved and this helps with your consistency and shot dispersion too. Both the P790's and the JPX Hot Metal Pros are quality clubs that have a lot of positive traits.

The Mizuno irons have been out for a considerable amount of time, so if you are sticking to a budget and need clubs to help you to increase your distance, then they could be perfect for you.

If you want a set of irons that you will treat as an investment for the next five or six years, then we believe you should go for the TaylorMade P790's.