Rory McIlroy: What's in his new TaylorMade golf bag for 2022

Rory McIlroy is showing off his brand new TaylorMade clubs at the Abu Dhabi HSBC Championship on the DP World Tour. 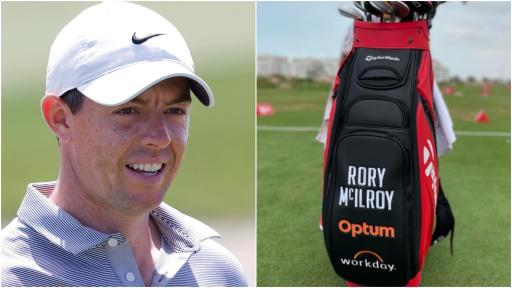 The golf clubs in the bag of Rory McIlroy have been revealed for 2022 following the Northern Irishman's first appearance of the year on the DP World Tour in Abu Dhabi this week.

McIlroy has decided to join Tiger Woods by sticking the new TaylorMade Stealth Plus Driver - a brand new carbonwood from the company - straight in his bag.

The four-time major champion is using the new red-faced driver in 9 degrees with a Fujikura Ventus Black 6-X shaft.

RELATED: HERE'S WHY RORY MCILROY IS BUZZING WITH HIS NEW TAYLORMADE STEALTH DRIVER

Stealth on the links: Go behind the scenes with the tour report from #ADGolfChamps https://t.co/ApdOBMqtSM pic.twitter.com/Bi6bhFzw8U

McIlroy is also using the new TaylorMade Stealth Fairway Woods in 15 degrees and 19 degrees, with a Fujikura Ventus Black 8-X and 9-X shafts.

The irons in his bag remain unaltered for 2022 with McIlroy gaming the the TaylorMade P770 3-iron and P730 Rors Proto irons from 4 to PW with Project X 7.0 shafts.

McIlroy is also sticking by his TaylorMade MG3 wedges in 54 and 58 degrees, in Project X 6.5 shafts.

On the greens, an area McIlroy will be keen to continue making progress, he remains with the TaylorMade Spider X putter and TaylorMade TP5x golf ball.

NEXT PAGE: WHAT'S IN THE BAG OF COLLIN MORIKAWA 2022