Rory McIlroy is set to put the new TaylorMade Stealth driver in his bag for the entirety of the 2022 PGA Tour season. 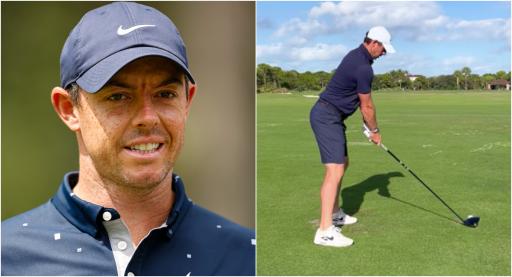 Four-time major champion Rory McIlroy is set to put the new TaylorMade Stealth driver in his bag for the 2022 PGA Tour season.

The new TaylorMade range uses 60 layers of carbon in the clubface which is much lighter than traditional titanium heads. Nano-texture technology in the clubface creates the perfect amount of friction to make your ball spin less off the tee.

The new driver also stands out with a unique red-coloured face. All of these factors seemed to have impressed McIlroy who is sitting out the Sentry Tournament of Champions this week.

"Saw everyone else talking about the new #StealthDriver and thought I'd give it a try. Think I'll keep it in the bag for the season," the Northern Irishman wrote on Instagram.

In 2021, only Bryson DeChambeau drove the ball further than McIlroy. Perhaps the TaylorMade Stealth driver could help to enhance his long game and push towards his first major championship in eight years.

RELATED: BUTCH: "IF TIGER DOESN'T LEAVE ME ALONE, I'M GOING TO HIT HIM WITH HIS CLUB"

Despite the 32-year-old's season being littered with inconsistencies, he still managed seven top-10 finishes in 21 events in 2021 and he won for the third time in his career at the Wells Fargo Championship.

McIlroy is one of many golfers who are excited to put their new TaylorMade drivers to use. Tiger Woods also took to Instagram to describe the Stealth driver as a "Truly amazing product."