Sneak peak: The Nike Air Jordan 4 "Bred" is on its way in time for Christmas

Take a look at the latest upcoming release from Michael Jordan's line of golf shoes from Nike. 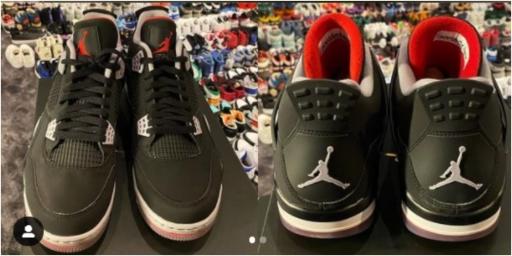 NBA legend Michael Jordan is known for his love of golf so it was no surprise when Nike started producing golf shoes.

His signature basketball trainers retail on the more expensive side and their new offerings will be continuing that way.

Dressed in black, red, grey and white this golf-edition of the Air Jordan 4 mimics the iconic look as the original.

The shoe is completed with spikes on the outsole with the Air Jordan logo on the tongue.

They are rumoured to be released on 22 December on Nike.com and selected retailers.

Due to his enduring popularity it results in high demand for golf shoes and as a result we have seen a number of interesting releases.

Michael Jordan was most recently seen at the Ryder Cup in Whistling Straits.

He puffed on cigars and was seen grinning from ear-to-ear as the United States ran out 19-9 winners over Team Europe.

Jordan has attended every single Ryder Cup since the Battle of Brookline in 1999.

He is rumoured to play golf every day and gambles for huge sums of money.

Stay tuned at GolfMagic for future news of the release.

RELATED: TEENAGER SAVES HER FATHER'S LIFE ON THE GOLF COURSE

RELATED: CONTROVERSIAL STATUE NOW ON A GOLF COURSE IN TEXAS

NOW WATCH: GOLFER HITS A BIRD WITH HIS TEE SHOT, WHAT NEXT?