How much bang do you really get for your buck? 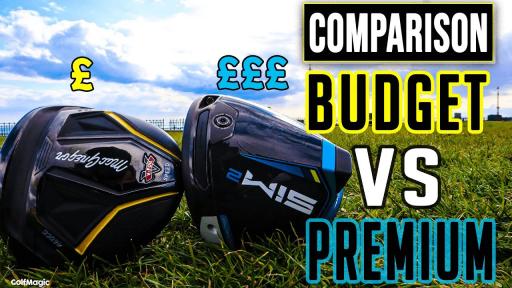 Drivers in the modern era certainly don't come cheap, but the premium price tags are associated with the best brands in the game, but there are some cheaper alternatives out there on the market.

Brands such as TaylorMade, Callaway and PING have been making some of the best drivers in the game for a very long time and the technologies used in this day and age are nothing short of incredible.

Some amateur golfers though might not want to part ways with all that cash to get their hands on the most premium products around, but still want something fresh that hasn't been used by anyone before them.

That's why 'budget' golf clubs still exist and some of them offer a lot for a fraction of the price, but how do they compare with the best clubs in the game?

Well in our latest brand battle that's exactly what we wanted to find out, so our equipment guru Alex put the Tour-proven TaylorMade SIM2 driver, that has an RRP of £449, up against the MacGregor V-Foil Speed driver, which sells for just under £145.

WATCH OUR PREMIUM VS BUDGET TEST BELOW:

As the defining component of SIM2, the forged aluminium ring is one of four crucial elements of the unique construction – each serving a vital function that allows the driver to be forgiving, fast and powerful. The other modules are the carbon crown, carbon sole and milled back face cup.

Featuring a high-MOI design for increased stability, the glistening, black headed V-Foil Speed Driver offers greater ball speed and distance with the ultra-thin club face. Whilst offering both 10.5° and 12° lofts along with a premium lightweight graphite shaft, the V-Foil is designed with an expanded sweet-spot for greater forgiveness making it the ideal club.

Two very different drivers coming in with very different price tags. So can the MacGregor V-Foil Speed perform anywhere near to what the TaylorMade SIM2 is capable of? Find out by watching the video in this article and if you haven't already, hit the like button and subscribe to our channel!