TaylorMade reveals what's in the bags of both Tiger Woods and Rory McIlroy at the US PGA Championship at Southern Hills. 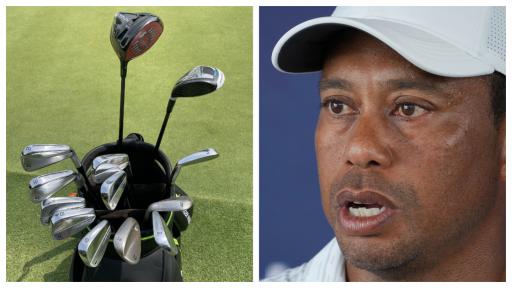 Certain athletes defy Father Time. Tiger Woods is one of them, writes TaylorMade.

It was only a short while ago that the 15-time major champion was flying his 3-iron 240+ yards to the amazement of TaylorMade Tour staff.

It was particularly impressive when you consider the weakened loft and the fact that he was hitting a butter knife with rebar attached to it.

For all of Tiger’s defiant powers, things are different with this comeback. Don’t get me wrong, we mere mortals are amazed and appreciative that he’s even able to play golf at this stage let alone compete in majors.

After his trip to Augusta earlier this year, the TaylorMade Tour team made an observation and reached out to Woods with a simple question.

“Would there be any benefit to a 3-iron that went higher and farther?”

His answer: “There’d be a huge benefit…”

Knowing that P·770 packs a lot of performance into a compact blade-like shape, TaylorMade started there.

Powered by a hollow-body construction filled with SpeedFoam™ Air and a Thru-Slot Speed Pocket on the sole, the design is all about added forgiveness and faster ball speeds.

With these insights in mind, TaylorMade built various P·770 3-irons and 2-irons (even a couple P·790s) and sent them off to Jupiter, Florida.

After substantial testing, Tiger showed up to Tulsa with both P·770 irons is his bag. As anticipated, the P·770s are carrying 8-10 yards farther, launching higher and spinning right around 4000 rpms – which is optimal.

TaylorMade has grown accustomed to seeing it over the past 25 years, but Tiger's iron game is dialed. He's hitting precise yardages and managing the distance gap at the long end of his bag with the help of P·770.

Furthermore, replacing his 5-wood with a 2-iron will help him maintain the ball flight and trajectory he's looking for (stingers anyone?) with an added element of control.

Tiger rarely tweaks his bag, but this one is notable.

If you're like us, you can't wait to see the results in live competition. Is it Thursday yet?

Related: Tiger Woods reveals why he has not got in touch with Phil Mickelson recently

Rory McIlroy comes into this week with an unreal track record at this championship, having won it twice and compiled five top-10 finishes. Although this is his first time competing at the venue, don’t bet against the Northern Irishman.

“We’ve dialed Rory in to where he’s freely hitting both shots with his driver. The one where he teases it down and lets it fade slightly into the fairway. Then the one that’s high and turning over that’s part of his DNA,” says Senior Tour Rep Adrian Rietveld.

“When he’s in control of both those shots, he can go around any course in the world and win.”

The specs of Rory’s driver have been locked in since early in the season, when he sprinted out of the gate in two events on the DP World Tour (T12 and 3rd).

For a player with Rory’s speed, the focus is always on dispersion and accuracy. To achieve it, the TaylorMade team shortened the length slightly for added control. He didn’t lose anything on the distance front.

The World No. 7 has oscillated between Stealth and SIM 3-woods, but both models have similar specs.

The lofts check in right around 14.25°, which is up from the 13° he’s played in the past. The increased loft lets him see a bit more of the face at address, while spinning it right at 3,200 rpms.

It gives him a club he can take off the tee or off the deck with extreme confidence, hitting ball speeds upwards of 179 mph and carries of 300+ yards.

Rietveld calls Rory: “The best 5-wood player I’ve ever seen,” and his 19° Stealth Plus 5-wood might be the most interesting club in his bag. Why? Because it’s one of the most versatile. Rory’s 3-wood is pushed to maximize distance and accentuate the strength of his game – hitting the ball a lot farther than everyone else. That creates a substantial gap in yardages when you jump from his 3-wood to his longest iron. Insert the 5-wood. It’s a club that needs to cover 250 yards or 290 – and every number in between.

“It’s really a unique club for Rory because of that versatility,” says Rietveld. “It’s shorter than a standard 5-wood and has a slightly stronger loft at 17.5°. It’s like watching an artist at work seeing all the different shots he can hit with it.”

Rory’s switch to the new TP5x ball was a big factor in optimizing the performance of his fairway woods.

For him, that ball was spinning less, but more importantly, it was “holding” the spin. As Rietveld describes it, every player at this level has a high-spin ceiling and a low-spin floor with each club.

The best way to judge the performance of a golf ball is to measure how much spin jumps on their high-spin swings. When that jump is minimal, or “holds,” that when the ball is right.

He continues to play the Rory Proto irons and his specs have gone unchanged for the last few years. The lofts are close to standard with 4° increments between irons, while lie angles change at a .5° increment. They weigh in at D4.5 with Project X Rifle 7.0 shafts and 6.5 in his wedges (NOTE: Tour pros generally use softer shafts in their wedges for added feel).

Earlier this year, he made the decision to switch to high-bounce soles in all of his MG3 wedges and immediately noticed a lower and more controlled flight. He also noted how much better the club slid through the turf with, especially from 50-75 yards. He tops off each club with the multi-compound black on black grip with two wraps.

How will Tiger Woods and Rory McIlroy get on at the US PGA this week? Share your thoughts and comments over on the GolfMagic social media channels, or come and join us over on YouTube.