Tiger Woods gives his verdict on Phil Mickelson - and then declares he can win the US PGA Championship for a fifth time in his career this week. 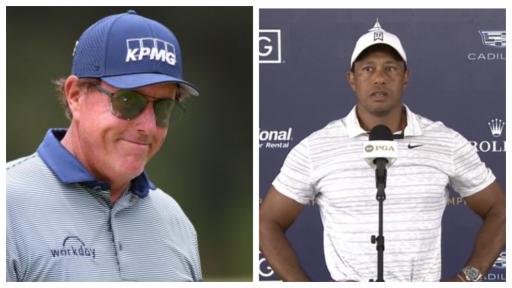 Tiger Woods admits he has not reached out to speak to Phil Mickelson in recent months because he has "a completely different stance" on how the PGA Tour should be run.

Woods, speaking to the media ahead of the US PGA Championship at Southern Hills this week, reiterated his full support of the PGA Tour in light of Mickelson declining the chance to defend the Wanamaker Trophy due to recent events.

For Woods, it's all about legacy and less about leverage.

"It's always disappointing when the defending champion is not here," said Woods of Mickelson.

"Phil has said some things to a lot of us who are committed to the Tour and the legacy of the Tour have pushed back against, and he's taken some personal time.

"We all understand that but some of his views on how the Tour should be run, there has been a lot of disagreement there. But we all know as a professional, we miss him being out here. He is a big draw for the game of golf, he has taken his time and we all wish him the best when he comes back.

"Obviously we are going to have some differences of opinion on how he sees the Tour but we will go from there."

Related: Tour agent believes Greg Norman could soon be axed by the Saudis

Woods added: "I have not reached out to him, I've not spoken to him. A lot of it has not to do with personal issues, it's just our viewpoints of how the Tour should be run and could be run, and what players are playing for and how we are playing for it. I have a completely different stance on that so no I have not.

"I don't know what he is going through but I know the comments he made about the Tour and the way it should be run, could be run differently and the different financials that could have happened, and I just have a very different opinion on that so I've not reached out to him."

Mickelson came under fire earlier this year when his comments made to biographer Alan Shipnuck back in November 2021 were brought to light about what he made of the Saudi regime and how he planned to use their money in a new Saudi-backed golf circuit as "leverage" against the PGA Tour.

Lefty has now taken a lengthy time out of the sport to figure out what he wants to do and which Tour he is going to support moving forwards now at the age of 51.

How the controversy all started: Mickelson's controversial comments to Shipnuck

Mickelson has lost the majority of his sponsorship deals since his controversial remarks were made public.

Woods considers the escalation of events would not have happened so fast had it not been for social media.

"It has ramped up very quickly," added Woods.

"I think if this would have happened 20 years ago it wouldn't be as fast as social media has changed the landscape. Whether it's real news or fake news, opinions get out there instantly. It can sway very quickly one way or the other.

"What we are seeing in society, it's very bipolar. It's one way or the other. The view points that Phil has made with the Tour and what the Tour has meant to all of us has been polarising as well."

Woods added: "Phil has his opinion on where he sees the game of golf going, and I have my own view of golf.

"I've supported the Tour, my Foundation has run events on Tour for a number of years. I just think what Jack [Nicklaus] and Arnold [Palmer] have done, breaking away from the PGA of America to create the PGA Tour in the late 60s. I just think there is legacy to that. I've played for a couple of decades and think there is legacy to it, and I think the Tour has so much to offer, so much opportunity.

"Yes, I understand different viewpoints but I believe in legacy, the major championships, big events, comparisons to historical figures of the past.

"There is plenty of money out here, the Tour is growing but it's just like any other sport like tennis, you've got to go out there and earn it. You've got to go and do it. It's just not guaranteed up front."

As for Woods' chances this week as he bids to win a fifth PGA Championship and a 16th career major at the scene of his 2007 PGA triumph, the former World No.1 likes his chances.

"I feel like I can win yeah, definitely," affirmed Woods. "I've just got to go out there and do it. It starts on Thursday and I'll be ready.

Next Page: Tiger Woods to play the opening two rounds of the US PGA with Jordan Spieth and Rory McIlroy