Tiger Woods tests another new putter following his struggles on the green at The Northern Trust. 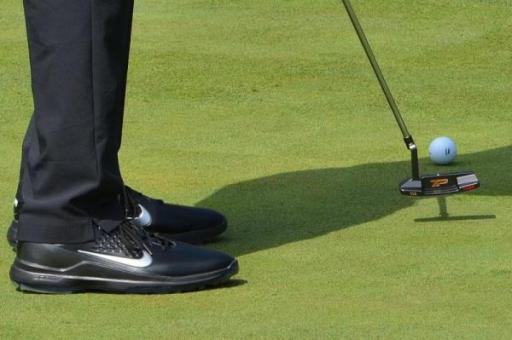 It remains unclear whether the 14-time major champion will put the putter in play when the tournament begins on Friday.

The Juno model looks close to the retail edition, save for the alignment dot (the retail model has a line) on the topline and “TIGER” stamped on one of the bumpers.

After a lousy putting week at Northern Trust, Tiger Woods practiced today using his @TaylorMadeGolf Ardmore 3 mallet AND a TP Collection Black Copper Juno. He used the blade on the first hole of his practice round to hole a 15-foot birdie putt. https://t.co/gvbUPGb8fX pic.twitter.com/frC45rKUOB

Woods switched to a mallet putter in July, benching his Scotty Cameron Newport 2, a club he used to win 13 of his 14 major titles.

He finished tied for fourth at the Quicken Loans National with a TaylorMade Ardmore 3 mallet, and then tied for sixth at The Open and finished runner-up at the US PGA. During that stretch he improved to 31st on the PGA Tour in strokes gained: putting.

But Woods appeared to struggle on the greens at The Northern Trust last week, needing 120 putts for 72 holes. He lost 4.92 strokes to the field.

“It's just one of those things where I'm struggling seeing the lines. The pace has been OK, not great, but my feel is just a little bit off, whether I'm seeing high lines or low lines, they are just not quite dialed in yet.”