WATCH: What is Callaway's TRIPLE TRACK Technology all about? 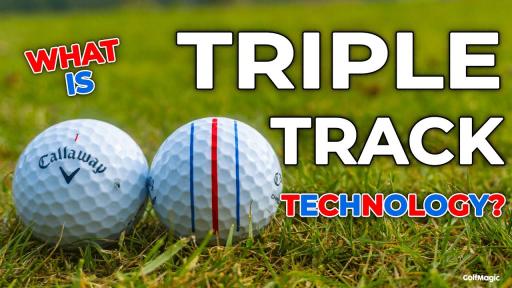 This feature is in partnership with Callaway.

So what is Triple Track Technology exactly?

Well there is a lot more science behind it than just one thicker red line placed in between two thinner blue lines.

This is a similar technology to one that is used in landing strips in aircraft carriers, which is dependent on the ability of the brain to process small differences in alignment detected in the eyes.

Triple Track Technology is currently favoured by a number of Callaway staff players on the PGA Tour, none bigger than reigning US PGA champion Phil Mickelson.

Mickelson, a six-time major champion, loved the technology so much when he first saw it on the company's ERC Soft ball a couple of years ago that he wanted it stuck straight onto his Chrome Soft X balls.

While initially Triple Track only featured on ERC Soft balls, the brand now features the technology on its popular Chrome Soft, Chrome Soft X and Chrome Soft X LS balls. Standard side stamp balls are also available, along with Truvis models too.

Following the instant success of Triple Track on Callaway golf balls, the company has now included the technology on a number of its Odyssey putters.

GolfMagic's Equipment Editor Alex Lodge spoke to Callaway's global director of golf balls, Jason Finley, to learn more about Triple Track Technology and why it has become so popular with golfers seeking improved alignment around the greens.

Jason also gives us greater insight into Mickelson's own feedback on Triple Track Technology and what the future holds for it.

Stay tuned for GolfMagic's full review on Triple Track Technology where we take the balls out onto the course to see if it improves our game.