Woodland comes through play-off at Phoenix Open: in the bag 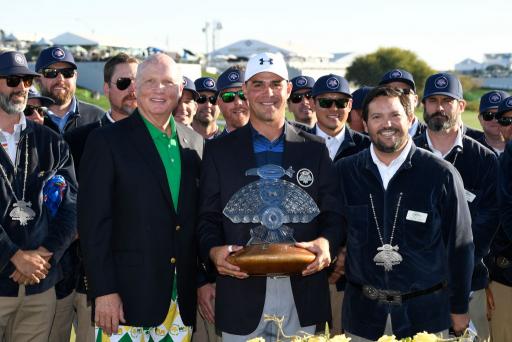 American Gary Woodland claimed an emotional victory in the Waste Management Phoenix Open after coming through a play-off against Chez Reavie.

The three-time PGA Tour winner Woodland and wife Gabby lost one of their twins to a miscarriage less than a year ago - Woodland held son Jaxson Lynn, who survived the pregnancy, after holing the winning putt for par on the first extra hole.

"He's a miracle, puts this in perspective really good," said the 33-year-old after winning for the first time since 2013. "It was obviously a long year for us, but, I'm very happy, one to be holding him and to be where I'm at right now."

Woodland fired a 64 on Sunday, seven under, including three birdies in the last four holes.

"I put a lot of work in this off-season. I mean, obviously, I knew what's been going on the last couple years, short game needed some adjustment. I spent some time with Pete Cowen,” he said.

“He really got me to where I have confidence in my short game. That allowed me to be more aggressive and let Butch and I do what we do and play aggressive off the tee, play aggressive with the irons and attack from there. It's been a good day.

"We're just building, we're going to keep growing, keep getting better. I still got some work to do, I still got to get more comfortable with the little things that I'm working on, but I'm excited about where were at."