Armlock vs Standard Golf Putting Technique! Could you turn to ARMLOCK putting?

The Armlock putting technique has caused much controversy on the PGA Tour, but it can definitely improve your game. 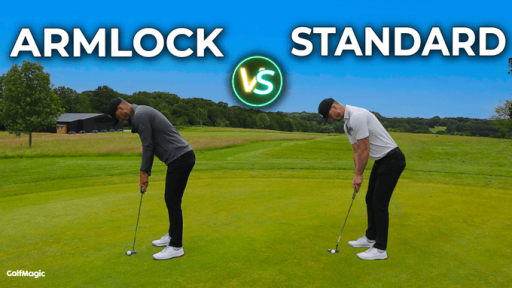 GolfMagic reviewed the Sik Golf Pro C-Series Armlock putter and concluded that this was a fantastic, well-designed putter that will improve your game.

Now, Alex has taken both the Sik Golf putter and the Cobra Grandsport 35 to Mannings Heath Golf and Wine Estate to compare the feeling of the Armlock putting grip and a conventional putting style.

Although both putters are made with similar technology, the Sik Golf Pro C-Series Armlock putter is 42 inches long, while the Cobra Grandsport 35 putter is just 34 inches long.

WATCH OUR ARMLOCK VS STANDARD PUTTING VIDEO BELOW

Players such as Bryson DeChambeau, Xander Schauffele and Will Zalatoris have all used the Armlock putting grip on the PGA Tour and have received mixed reviews for it.

However, the Sik Golf Pro C-Series Armlock putter brings great potential to improve your putting because it promotes the use of your arms and the rocking of your shoulders.

Due to the rigidness of your left arm and the size of the putter grip, it eliminates the use of your wrists which if they bend too much, can cause your putter to move off-line.

The use of an Armlock putter can also make you more confident with short putts. With the size of the grip and the encouragement of arm and shoulder use, this helps to deliver the clubface in a straight line.

A conventional putting style, despite being tried and tested over a number of years in the sport, is vulnerable to overusing the wrists and not combining your upper body to move your arms.

Although we have seen great benefits from using the Sik Golf Pro C-Series Armlock putter, they are still fairly uncommon in both the professional and amateur golf worlds.

The Armlock style is a source of controversy, but if you were to test yourself with this unorthodox and rigid technique, you may be surprised at how well your putting improves.

NEXT PAGE: OUR FAVOURITE G/FORE POLO SHIRTS THAT YOU NEED THIS SUMMER