PICKS OF THE WEEK: Best NEW drivers to order for 2021

Some of the latest drivers released for 2021 are now available to buy or pre-order! 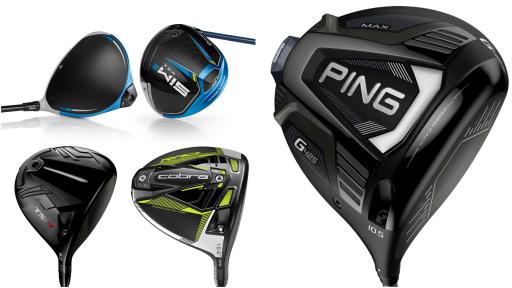 The start of a new year is always exciting in the golf industry as we see some fantastic new launches from brands. We've been introduced to the latest new drivers set to hit the market and if you're looking for a new big stick, you're spoilt for choice.

Scottsdale Golf has a few of the newest drivers ready to buy or pre-order and for a fantastic price, so check out some of the best below.

The PING G425 Max driver is the most versatile of the three new drivers in the range and will find its way into the bags of golfers of all skill levels. The G410 Plus was a superb looking golf club but the G425 is has taken the aesthetics to another level. Behind the golf ball the G425 Max belies is 460cc size and looks positively huge at address.  Even the most erratic of drivers will feel their confidence building as they step onto the tee with this beast.

The RADSPEED driver is one of three models in the new range and is aimed at golfers that produce faster club heads speeds, as they will be able to take advantage of the high ball speeds, low spin rates and trajectory control that this driver produces. The RADSPEED driver takes its name from a popular engineering concept called Radius of Gyration, which is the distance from the Centre of Gravity to the position of the technology. The Cobra R&D team found that by increasing both the Radius of Gyration and the distance between the front and back clubhead weights, they could create a blend of speed, forgiveness and spin control that had not been achieved before.

The TSi 3 driver is aimed at golfers who are reasonably consistent ball strikers and Titleist have added an innovative CG placement track on the back of the head to position the weight more effectively behind the most likely strike point, if a golfer has a tendency to slightly heel strike the ball, the CG can just be shifted slightly to the heel ensuring maximum ball speed off the face and the same applies for the toe strikers out there.

The Srixon ZX7 driver is the more compact driver of the two new models available and behind the ball it offers a classic, clean look that better players will love. As it is also the lowest spinning model the face is also somewhat deeper than found in the ZX5. The crown is completely carbon and has a real premium look, with a simple alignment aid completing the unfussy aesthetics. Whilst the Srixon ZX7 driver is aimed more at the better players the feel at impact is one that every player will adore. When striking the ball there are virtually no vibrations being sent up the shaft, mainly because of their new Rebound Frame technology. With four different sections to the construction of the head the Rebound Frame has a second flex point set back from the face allowing more energy to be transferred into the golf ball at impact.

The PXG 0811Prototype X Plus driver is the next generation of high performing PXG driver. Following on from a superb reception by its tour players, PXG have decided to make the unprecedented step of releasing this prototype to the golfing public. Featuring the same classically stealthy good looks at address as its predecessors the Proto driver is an absolute beauty and has a compact looking profile that belies its 460cc size. With a carbon fibre crown raised through the centre of the head it prevents any unwanted glare from strong sunlight and when behind the ball it just looks as though it is going to send the ball far down the fairway.

With an intense focus on speed and forgiveness, the SIM2 Max delivers high MOI properties with a heavy 24g tungsten weight positioned on the Inertia Generator. The TPS Front Weight is strategically located on the sole of the club to encourage the optimal mid-to-high launch with mid-to-low spin properties, delivering complete performance and max forgiveness.