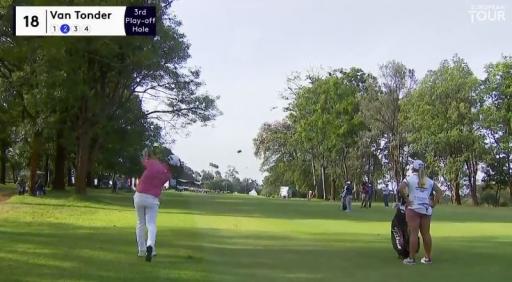 Daniel van Tonder can now call himself a European Tour winner after he won the Kenya Savannah Classic at Karen Country Club on Friday.

The tournament wasn't without drama, with van Tonder leading during the final round, before making back-to-back bogeys at 14 and 15.

A birdie at the last mean that van Tonder went into the clubhouse at 21-under par for the tournament and his score was matched by Jaz Janewattananond, meaning a play-off was needed to decide the winner.

Both players missed putts for a birdie when they played the 18th again at the first play-off hole and it was pars on the scorecard once again at the second attempt.

Thorbjorn Olesen "grabbed woman's breast" on flight, hears London court
The story of how an African pastor could play on the DP World Tour!

At the third play-off hole, van Tonder's approach had pin-point accuracy as he left a short putt for birdie and he raised his arm in celebration after producing such a high-quality shot under pressure.

Janewattananond gave his birdie effort a good roll, but he settled for another par, whilst van Tonder was able to sink his birdie putt and win the Kenya Savannah Classic.

"It sounds amazing," van Tonder replied when asked how it sounds to be called champion on the European Tour. "I've been playing well, I've been working hard on my game and everything and I'm overwhelmed, very happy.

"Me and my wife have been a good team working together and yeah, I'm happy.

"I was thinking I'm usually a bit dangerous with a few holes to go and I know I can make a few birdies. Second last hole I left myself behind the tree and it took some thinking of making a par there and then on the last hole I told my wife let me just put myself on the green and give myself a chance of making the putt and we did.

The South African has won on the Sunshine Tour in the past and he believes that experience helped him to win for the very first time on the European Tour.

"If it wasn't for the Sunshine Tour I don't think I would have done this, so thank you to them," he added.