Tyrrell Hatton threw his iron in disappointment during the WGC Match Play and it's caused a serious reaction from golf fans. 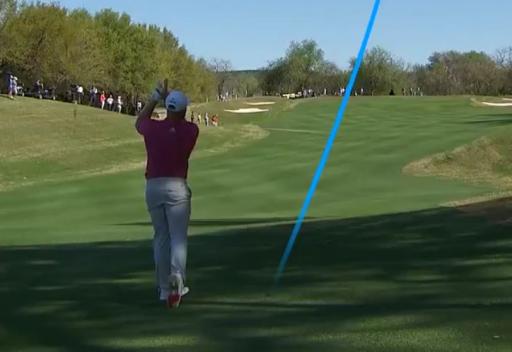 Tyrrell Hatton has quickly become one of the most consistent players on the PGA Tour, but his on-course reactions always seem to cause as stir on social media and this time, it's a club throw in his match against Sergio Garcia that has got everyone talking.

The Englishman crashed out of the WGC-Dell Technologies Match Play after suffering a 3&2 defeat to Garcia and Hatton failed to really get going on Thursday, winning just one hole.

Garcia now has two points on the board having won both of his matches in Group 8 and the Spaniard needs just half a point in his match against Matt Wallace to go through to the knockout stages.

"I think it was a very tricky day, it was much windier than it has been the last couple of days," said Garcia after his victory over Hatton. "Also, probably a different direction. So obviously started well, that always helps, got up early, missed a couple opportunities but then I made a couple nice putts on 8 and 11.

"Kind of kept myself going and then hit some good shots coming in and that was about it. But it's a tough match, you know, I mean both matches yesterday and today, they're two guys that obviously are friends of mine and they're really, really good players, so you know that it's going to be tough and you just hope that you go out there with your best game and get the win."

During the match between the two potential Ryder Cup teammates, Hatton hit an approach shot that he wasn't too pleased with, so he launched his club with a rather smooth flick of the hands, before sarcastically clapping.

The clapping at the end is the icing on the cake. pic.twitter.com/VFZFOUSoOY

Hatton's passion for the game is hard for him to control at times and as usual, his latest antics had golf fans in a social media debate about the 29-year-old, with some grilling him for his attitude and others applauding him for showing he cares.

If I caught my students doing this there would be absolute hell to pay.

The comments here are the perfect cross section of golf’s image problem: the traditionalists who fear anything disrupting their “gentlemen’s game” and the younger generations who view golf as an entertainment sport just like any other. Nothing wrong with a comical club throw!

This is the main reason he's one of my favourites. Fantastic golfing ability and his regular comical reactions show a sense of humour and totally relatable side. Great role model for the young. Top lad.

Breath of fresh air compared to the robotic dull tour pros who you wouldn’t know if they were happy annoyed or bored. More importantly he’s respectful to opponents and gives himself a hard time. Nothing wrong with that.

And working his club into the ground on someone ELSE’s course is pure class too,guys got no respect .Great golfer but absolute tool.If I behaved similarly at my place of work I’d be sacked