Seven minutes of Rory McIlroy at an empty range with Toptracer. Enjoy... 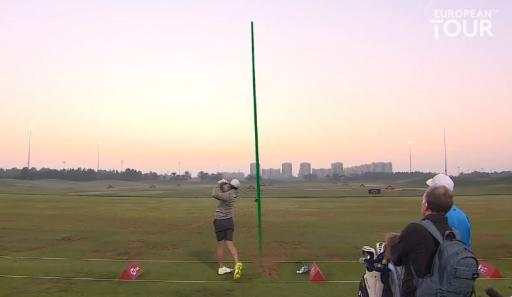 A seven-minute long video of Rory McIlroy on the driving range with Toptracer technology has quickly become one of the most watched videos on the European Tour's Twitter page.

The video was posted on Wednesday, the day before the opening round of the Abu Dhabi HSBC Championship and it has already amassed over 250,000 views.

RELATED: Rory McIlroy: What's in the bag for 2021 alongside his new TaylorMade driver

It's the perfect video for any golf fan, with a picturesque setting and no other players around. Just one of the best golfers on the planet, hitting ball after ball, plus a bit of chit-chat with his caddie Harry Diamond.

WATCH MCILROY'S RANGE SESSION IN THE VIDEO BELOW:

McIlroy is playing on the European Tour this week for the first time since 2019 and the Northern Irishman has got off to a flying start to the tournament with a sensational opening round on Thursday.

The 31-year-old showed exactly why he is the favourite to win the Abu Dhabi Championship with the bookies and armed with his new SIM2 metalwoods, McIlroy produced birdie after birdie in a flawless 8-under par round.

His range session on Wednesday has received hundreds of comments from golf fans from around the world.

"This is hypnotic, I could watch the tracer and listen to that sound all day long, it makes me realize how bad I am and how great Rory is and I am perfectly fine with that, I absolutely LOVE golf , Thank You European Tour for this piece, Thank You Rory."

"Absolute clinic. Shows how much pressure they are under. His range game doesn’t always translate to his on course game. But man, what a ball striking clinic."

"What a swing and what a ball flight... If only Rory can get out of his own way and start to win the big events again... Or maybe his hunger is gone, he’s making unbelievable money for just making cuts."

"Oh to be able to hit even just one shot like that!"

"This is the kind of content I love! Hypnotic!"

NEXT PAGE: Brooks Koepka on the verge of signing for Srixon? This image suggests maybe...